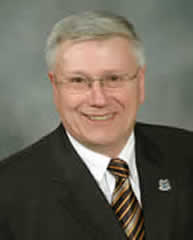 (November 8, 2010) – District 7 Councillor Bill Karsten today (Nov. 8) became the new Deputy Mayor for Halifax Regional Municipality.
The new Deputy Mayor takes over from Councillor Jim Smith who held the position for a one-year term.
“I appreciate the vote of confidence from my colleagues and will continue to proudly represent my constituents and the residents of HRM with passion and endless effort,” Deputy Mayor Karsten said.
The new Deputy Mayor was elected to Regional Council during the 2004 election to represent District 7, Portland – East Woodlawn and was re-elected by acclamation in 2008.
He has a 30-year business background in Sales, Marketing and Management. Prior to being elected to Council, he spent 22 years as District Manager (Atlantic Canada) for Curtis Industries of Canada Ltd.
A dedicated volunteer, Deputy Mayor Karsten was involved with several Woodlawn Softball teams, organized local and provincial tournaments and has done extensive fundraising.  He was an active member of the Canadian Cancer Society. His most recent volunteer efforts include serving as Vice President of Child Find Nova Scotia and on the Board of Directors of Child Find Canada.
Deputy Mayor Karsten is currently the Vice Chair of the Administrative Standing Committee, a member of the Audit & Finance Standing Committee, FCM 2011 Conference Council Advisory Committee, Harbour East Community Council and Trade Centre Ltd.
HRM’s Deputy Mayor serves for a one-year term and is elected by his or her peers.
Source: Release