Hi, how are you? I’m a big fan of your work. No seriously – I cry myself to sleep at night because I can’t get Ed on DVD, and I actually really liked both He’s Just Not That Into You and Going The Distance. And OK, I don’t use a Mac, but I totally dug you in those commercials.

Anyway, I’m writing because you were really great on New Girl last night. It was the funniest episode the show has had yet, and you really brought out the best in everyone. I know you’re supposed to stick around for three episodes, but do you think that could be extended? This show clearly needs you. I need you. Just think about it, OK?

OK, so who watched New Girl last night? It was hilarious, right? I had so many laugh out loud moments, and I don’t think I even cringed at Jess once. Justin Long’s nerdy character helped her strike the right balance of wacky Jess-ness without being grating. In fact, I thought all the characters were pitch-perfect in “Thanksgiving”. 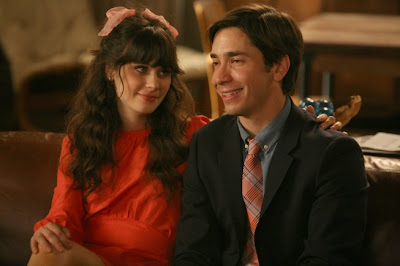 Jess met her match in Paul, an equally awkward and nerdy fellow teacher. Jess was into Paul, and invited him over for Thanksgiving dinner after he mentioned that he usually spent it with his grandmother, who died recently.

None of the guys wanted to have Thanksgiving, but Jess went ahead and hosted a dinner. But this time it wasn’t in an annoyingly oblivious-to-the-needs-of-her-roommates way, it was to impress a guy she liked. That’s something people can actually relate to. The problem was that Jess needed help with the cooking, so she bribed Schmidt into helping by offering to invite CeCe.

Obviously, the romantic connection between Jess and Paul is designed to highlight the romantic connection between Jess and Nick – he was the only guy who didn’t like Paul. But that works. Jess was an emotional mess when she moved in, and if the writers want a relationship between Jess and Nick to actually work out then she needs to rebound with someone else. In the meantime it was fun to see Nick be grumpy and jealous, and the screaming match they had about Jess wanting to sleep with Paul was so hilarious, since we knew everyone on the inside of the door could hear everything they were saying. I can’t wait to see where the relationship between Jess and Paul goes over the course of the rest of his story arc.

As well as being a great episode for Jess, I thought this was the best we’ve seen Winston so far. When Jess introduced Paul, he immediately went to work on finding out if this potential fifth roommate would be a good fit for them. The word association game he played with Paul was hilarious – kazoo! – but also revealed that Paul respects boundaries and personal privacy. Later, the two bonded over having close relationships with their grandparents. It was fun to see Winston’s total acceptance of Paul contrasted by Nick’s grumpiness, and I think it was the first time Winston’s character was really well-used.

Meanwhile, cooking dinner with CeCe revealed that Schmidt has some quirks of his own, like near Emma Pillsbury level OCD. He shouted at CeCe for her unsanitary ways (but seriously, wash your hands before preparing food!) and that kind of turned her on. I like the tension that’s being created between these two characters because it’s completely different than the tension being created between Jess and Nick. It seems obvious that Jess and Nick will eventually get together, but the future is more unclear for Schmidt and CeCe. Yet, the mutual attraction is acknowledged in their case but is not yet acknowledged for Jess and Nick. That makes it a fun contrast.

Poor Schmidt worked so hard on preparing dinner, only to be thwarted time and time again. The turkey was frozen, they put it in the clothes dryer to thaw, only to have the dryer explode. The smoke forced them out of the apartment and into the one next door (Jess was watching it for a neighbor on vacation) and right before they sat down to eat, poor Paul discovered the dead body of the apartment’s occupant, Mrs. Beverly. Not only was this unexpected, but it was hilarious as Paul tried to escape the building and got trapped in the elevator with the body on a stretcher.

Later, Paul rejoined the group as they were in line at Best Buy for Black Friday, winning some brownie points from bringing along a bag full of turkey subs. (Foot longs!) He and Jess skipped away, singing together like totally happy weirdos who are about to go have sex.

So what did you guys think of “Thankgiving”? I really enjoyed all the little quirks and one-liners, so check out my list of a few of them below. It’s a long list, but I thought it was a really funny episode.