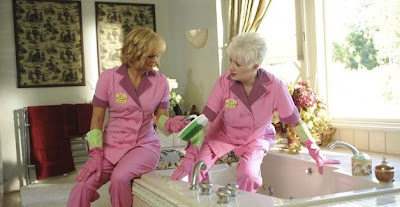 I was a big fan of The Partridge Family and when I was a kid Shirley Jones looked a lot like my mom, so I’ve always liked her. That’s why I was disappointed to see her so underused as Burt’s mom in last night’s lackluster episode of Raising Hope.

The episode saw Virginia and the family pretend to live in one of the houses she cleans when Burt’s snooty parents came to visit. The premise was funny enough, but the episode left me feeling cold.

First of all, if Sabrina’s whole family had jetted off to Turkey for Ironic Thanksgiving (I wish I were rich) why didn’t they all go there? Why occupy a stranger’s home? (#OccupyThanksgiving?) And while it was fun to see Sabrina pretend to be Jimmy’s wife and Hope’s mother, she’s been coming off as too snobby herself lately. When she snickered “Two malaprops in a row! God, I love this family,” I genuinely disliked her.

It turned out that Burt’s parents had lost all their money and asked Burt if they could stay with him in his new fancy house. He said yes, and of course the family who really lived in the house returned the next day, home early from their skiing trip thanks to an injury. Burt’s parents had to join him and Virgina as working class folk, and while it helped them earn some respect for their hardworking son, they couldn’t cut it. So they went to live with Burt’s rich brother. It just didn’t make sense – if they had a rich son, why were they living with Burt once they realized he’s still poor?

What I’ve always liked about Raising Hope is how it manages to make jokes about the Chance family’s economic situation without ever – ok, without usually making it feel cruel. We’re laughing with them, not at them. But when they cross that line and the show feels like it’s mocking the Chance family, things get awkward. This seems to happen more now that we’ve learned Sabrina comes from money – her affection for Jimmy and his family feels disingenuous and ironic, and that makes viewers question if our affection for the show is like that too.

Maybe if Jimmy and Sabrina actually start dating that could change, but no matter what I think the show needs to address it. I like Raising Hope, but this has been an uneven season so far.