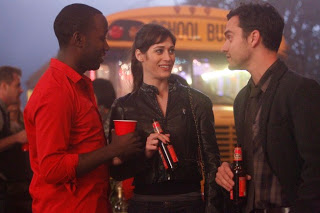 Considering how much I hated Glee last night, I was happy to discover that both New Girl and Raising Hope delivered delightfully funny episodes. Not only did “The Story Of The 50” bring the return of the Douchebag Jar (I gag I find hilarious), but it introduced a few new characters and social dynamics within the group.

Nick is dating a hot lawyer named Julia, who I immediately like because she’s played by Party Down‘s Lizzy Caplan and because she’s quite funny. They do Bill Cosby impressions and joke about how Nick dropped out of law school when he realized he hates lawyers, and he tried to keep her away from his embarrassing friends/roommates. I liked how Nick’s embarrassment of his friends played out as Julia was invited to Schmidt’s big 29th birthday bash and got to see not only how crazy Nick’s friends are, but all of the embarrassing things Nick has done with them. Like inventing something called “Bro Juice”.

Schmidt had a lot riding on his birthday party, since it was the last of his 20s and he has a lot of douchey friends to impress – particularly, his college frenemy Benjamin. Turns out Schmidt was fat in college, which provides a lot of insight as to why he’s so desperate to impress all the time. When his plans for a party bus fell through thanks to Frankie Muniz, Jess stepped in to try and throw a Schmidt-worthy affair. And of course, it had Jess written all over it. The bus was a school bus, there were safety helmets, and she accidentally ordered a last-minute male stripper.

We also met Jess’s boss for the first time, a vice-principal who confiscates drugs from the kids for her own use.The character didn’t get a lot of material, but she was funny enough that I’d like to see her again. Oddly missing from the party was CeCe – shouldn’t she have been there?

Benjamin proved what a jackass he really is when he relentlessly hit on Jess, causing an uproar that led to Nick’s date punching him out and the bus crashing. Turns out Julia has some anger management issues. Luckily, Nick finds then sexy. There was a moment of group solidarity that New Girl does well, but it was immediately tempered when, while waiting for the tow truck together, Schmidt tried to kiss Jess. And that, my friends, was how he ended up having to put $50 in the douchebag jar – an act that we’d witnessed at the beginning of the episode. I think my favorite thing, though, was the montage of all the other times Schmidt has had to pay up for the jar before leading to this all-time high.

What did you guys think of the episode? Did it make you laugh? Here are a few other moments and quotes I liked: