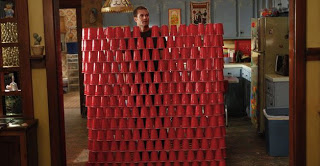 I know “The Chance family is stupid” isn’t exactly a new storyline on Raising Hope, but last night’s episode was one of my favorites so far this season. “Mrs. Smartypants” saw Jimmy, and then Burt and Virginia, attempt to get their GEDs after realizing that Hope is a very smart baby.

The problem? Jimmy had a baby with a smart girl – a serial killer, but smart nonetheless. As Virginia explained it, Lucy was “was a college graduate who avoided the police for years while she went on a murder spree. You’re a high school dropout who’s been arrested five times for peeing in public.” Ah, but she did name her baby Princess Beyonce. And now that kid is smart, succeeding at the shapes toy at age two when Jimmy still couldn’t do it at age four. It’s only a matter of time before Hope is smarter than Jimmy. So off to his GED course Jimmy went, which just happened to be taught by his old high school teacher who was not only around when Jimmy dropped out of school, but Virginia and Burt too. I love any opportunity to flash back to goth Jimmy, so I thought it was hilarious.

Not wanting to be the dumbest one in the family, Virginia and Burt decided to come too. To pass the test they all got tutors – Sabrina helped Jimmy, Maw Maw helped Virginia and, surprisingly, Frank helped Burt. Alas, they all failed. Turns out they’re all good at different things. So they devised a plan – in order for Jimmy to get his GED, they would each put his name on the portion of the test they were best at.

Personally, I loved the episode. “Mrs. Smartypants” managed to make fun of the Chances in a warm way because they were really making fun of themselves, and that’s when this show works the best. What did you guys think?

Here are some of my favorite quotes and moments: