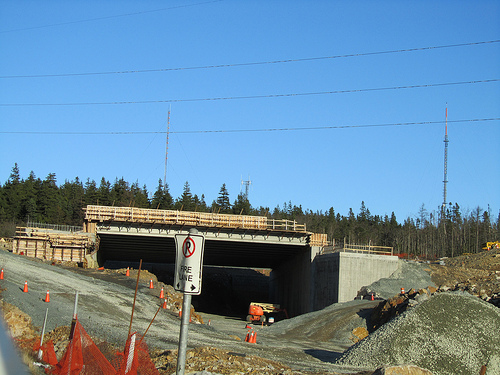 Halifax, Nova Scotia, January 16, 2012 – A new overpass on Highway 102 and the extension of Washmill Lake Drive are contributing to better traffic flow and safer driving for Haligonians. The Honourable Peter MacKay, Minister of National Defence, Bill Estabrooks, Minister of Transportation and Infrastructure Renewal, and Peter Kelly, Mayor of Halifax Regional Municipality, gathered today to celebrate the project’s completion.
Washmill Lake Drive (formerly Washmill Lake Court) now extends under Provincial Highway 102 and into Bayers Lake Business Park. The Halifax Regional Municipality (HRM) also upgraded Washmill Lake Drive from two lanes to a major collector with four lanes in most sections, with new bike lanes, sidewalks and storm water services.
These changes created a much needed third entrance and exit to the Bayers Lake Business Park, and residents of Fairview, Clayton Park, Mainland South and Peninsula Halifax now have an alternate access. The project also reduced traffic loading on Lacewood Drive – relieving existing and future traffic pressures and allowing for continuing development in this economic centre of HRM.
“Our Government is proud to invest in infrastructure projects that create local jobs and economic growth, while providing safer and more efficient transportation systems,” said Minister MacKay. “The completion of this project improves commuter safety while significantly reducing traffic backlogs and congestion in Bayers Lake Business Park.”
“The Washmill Lake Road extension opened in December and is providing motorists with alternative access into and out of Bayers Lake Business Park,” said Bill Estabrooks, Nova Scotia Minister of Transportation and Infrastructure Renewal, on behalf of Service Nova Scotia and Municipal Relations Minister John MacDonell. “Investment in projects such as this allows the government to make life better for Nova Scotians while creating jobs and boosting the economy.”
“The completion of Washmill Lake Drive emphasizes HRM’s commitment to maintaining and improving our infrastructure,” said Mayor Kelly. “By partnering with the other levels of government, we are able to make the maximum use of our financial resources as we keep pace with the growth of our community.”
The Government of Canada provided about $3.3 million towards the project, with the Province of Nova Scotia matching this contribution. The Halifax Regional Municipality is contributing the remaining balance to the project.
Federal support for this project comes from the Infrastructure Stimulus Fund, part of Canada’s Economic Action Plan. Working to create jobs, boost the economy and deliver results for communities, Canada’s Economic Action Plan supported over 28,500 projects across the country.
Source: Release