OK back from a bit of vacation, I’ll have a post later in the week about Halifax, UK  but now back to the regular content.

Sushi Nami is going in 827 Bedford Highway the newer building near Southgate.

There is a name for the restaurant replacing ONYX; it will be called East Of Grafton.

Hooked, is opening on Charles St. beside enVie. It appears to be a sustainable fish monger who will also offer classes and dinners. They have three other locations in Ontario.

Why have one new mobile pizza place when you can have two? Pirate Pizza is now on the roll but their weekday location is the parking lot of Don Schelew on Kempt Rd.

Ben Moss (as a chain) seeking creditor protection. Liquidating 11 of its stores Halifax Shopping Centre seems is one. Mic Mac is safe for now, as long as the chain survives.

On Portland St downtown, The Landing’s replacement is http://www.bestkeptsecretns.com/ 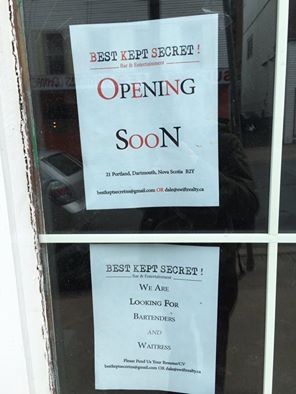 The Burger King interior reno in Bayers Lake is complete and has reopened; now they will be working on the exterior and drive thru, and be complete by June.