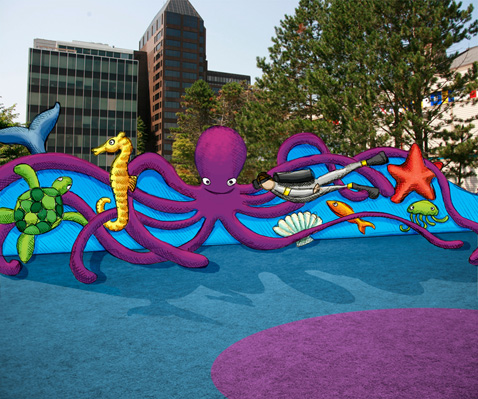 An octopus and lengthy submarine are going to takeover a piece of the Halifax Waterfront this August.
The popular playground near the Maritime Museum of the Atlantic is being replaced. Based on input from local children during consultation sessions last year, and experts ranging from boat builders and designers to safety consultants, two key features emerged – a two-dimensional octopus wall and a 45-foot submarine. There will also be new lighting, seating and landscaping.
"The waterfront playground is a signature spot for many families and the new one should carry on that legacy," said Colin MacLean, president and CEO, Waterfront Development Corporation Ltd. "This team has a passion for making it right. It's rewarding to see the children's vision come to life and involve the talents of local boat builders and designers."
Dozens of children and families gathered to pay tribute to the well-loved 25-year-old playground last weekend and get a sneak peek of its replacement.
The original playground featured a wooden play boat called Halcyon, a mythical Greek name for the Kingfisher that had magic powers to calm the waves in winter.
The tribute recognized the team who designed and built the original play area and gave people a chance to share their memories of it.
The submarine for the new playground is being built in Gold River by boat builder Bruce Thomson and his team at Tern Boatworks. They are using the same strip-planking method being used in the Bluenose II restoration project.
The structure includes a slide, periscope, portholes, climbing feature and interactive elements. The first level is also wheelchair accessible.
The playground team also includes McGowan Marine Design, Project Works, Fogo Creative, Grace Kells Playground Safety Consultants, and BMR Structural Engineers, who refined the concepts to ensure safety while maintaining a custom design for the Halifax waterfront.
"We've enjoyed being involved with the development of the playground with our partners, producing ideas and drawings based on the imagination of children," said Bruce Thompson, owner of Tern Boatworks.
"Now that we are building the submarine in the shop, it is rewarding to see these ideas take shape. Our crew is proud to be part of this unique project."
Children are encouraged to submit their ideas in the Name That Sub contest, until June 30. Send submissions to namethatsub@wdcl.ca or visit www.my-waterfront.ca .
Project partners include Halifax Port Authority, Maritime Museum of the Atlantic, Halifax Regional Municipality, and Outside! Planning and Design Studio.
Waterfront Development Corporation Ltd. is a provincial Crown corporation developing the strategic potential of the Bedford, Dartmouth, Halifax and Lunenburg waterfronts. Revenues are reinvested in the waterfronts to drive economic opportunity, enhance tourism and reflect and protect marine heritage.