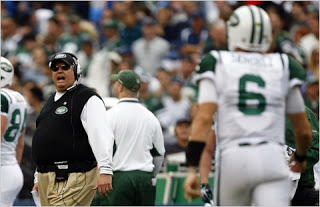 Rex Ryan and Marc Sanchez have won four playoff games on the road in the last two years.

One win and you are in the biggest game of the year. Thats right one more victory and you are in Superbowl 45 in Dallas Texas. This weeks matchups are set to be good ones as one of the oldest rivalries takes place again and a new one starts. Last week I went 3-1 the only loss the surprising victory by the New York Jets who took down the highly favoured Patriots in stunning fashion.
New York Jets vs. Pittsburgh Steelers.
These teams met earlier in the season where the Jets prevailed in a crucial game. The Jets had lost a two games in a row, one beating by New England and a bad loss at home against the Miami Dolphins. They then proceed to get their act together and pull out a thrilling 22-17 victory against the Steelers at Hinez Field in the cold.

This week will be no different as these teams are both going for a superbowl berth and this will be a great defensive battle. When Pittsburgh has the ball the key matchup will be Big Ben vs. the Jets Secondary. I like the Jets secondary to win this one because of the fact that Revis Island, Cromartie, and Wilson will be dominant. When the Jets have the ball the key matchup will be Mark Sanchez vs. the Steelers front 7. Can the steelers get to Mark Sanchez as his accuracy and pocket presence has always been a thing of question.

Another factor to add to this matchup is the fact that probowl saftey Troy Polamalu was not active in the previous matchup. His ability to see many things that other safetys miss is extremely priceless and will be a huge asset to the defense. The X factor for the Jets will be Shonn Greene. If he can get a solid run game started with LT against this stingy steelers defense it will be key to victory.

This game will be decided in the 4th quarter as both of these teams never quit and bring quality defenses to the table. I have been going against the Jets for too long, and they keep proving me and everyone else wrong that they are contenders. Look for the Jets to establish the running game earlier and continue pounding the ball down the Steelers throat. Don’t look for Pittsburgh to throw in the towel early or late in this game. Big Ben knows how to win and will certainly bring it.

Jets 23 – Steelers 20.
Green Bay Packers vs. Chicago Bears
This is easily one of the most intense/storied/greatest rivalries in all of professional football. With their rivalry starting early in the 30′s these teams have met a record 182 times and will make 183 this sunday at Soldier Field. This marks only the 2nd time that these teams have met in the postseason, a game in which the Bears took in dominating fashion. This year the 2 clubs have met well twice as they are in the NFC north a competitive division which was very tight this year as well with good teams. Chicago won the first time 20-17 at Soldier field. The second time Green Bay won 10-3 at Lambeau Field another great place wth such storied history.

This matchup will be super entertaining in the sense that both teams are really rolling and with the history that these teams bring. The Packers have grounded the Eagles and Falcons in consistent weeks and have showed no signs of slowing down. The Bears came off a victory last week against the surprising Seahawks who beat the defending champ Saints. When the Packers have the ball the key matchup will be Aaron Rodgers vs. the Bears front 7. Aaron rodgers is on fire, and had an amazing game against the Falcons last week were he nearly went perfect in the rout. The Bears front seven has been compared to the monsters of the midway back then, not nearly as good but still a dominanting defense who knows how to play football. The other matchup is going to be Jay Cutler vs. Clay Matthews/ BJ Raji. Culter is starting to get comfortable under martz and it is starting to show. The crazy gun slinger has started to set his feet and make passes to a receiving core which is less than star filled. On the other side you have BJ Raji who is eating up O-Lines whole and disrupting the run game. While Clay Matthews is scaring QB’s, RB’s and everyone on the other team with his crazy will to get to the QB and get rid of anyone in the way. Also his long hair doesnt help by making him any less scary. If Culter can stay up right which was a problem earlier on in the season, the Bears will be good.

Both games in the regular season came down to big plays, a fumble forced by Urlacher and in the other game it was an INT thrown by Jay Culter late in the game. The X factors this game for Chicago will be Devin Hester. His ability to change the game by either, returning punts/kicks for major yards or punting out of bounds or squibbing the ball, or playing WR, running the ball whatever it is Devin Hester does it. On the other side the X factor is going to be James Starks. Starks a virtually unknown before this season. He will need to be consistent and gain some quality yards to establish a run game against a stingy Bears defense.

This game will also be close just due to the level of these teams and how good they are. It will come down to one big play which changes the game late. I like Rodgers and the Packers to come out of the Soldier field with a victory as the cold is not an issue for a team which plays in the cold all the time. Rodgers is just too much and should slowly pick apart the Bears. Look for the Bears to get a run game going with Matt Forte pounding the ball.

Packers 27 – Bears 21
Armaan Ahluwalia writes for the Dal Gazette and is a regular contributor to Haligonia Sports. Check out his website www.1inthestands.wordpress.com and follow him on twitter @therealbrindian.