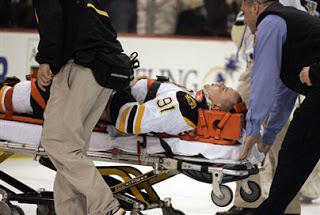 The NHL is a fast paced, hard hitting, energy filled game that deserves respect. Other sports are hardnosed (American football and Aussie rules football to name 2) but hockey is at speeds that are incomparable. The athletes are in shape and their bodies in tune with bruising and sore bones.
That being said, these athletes are constantly beat up and tired. It’s just a fact. Their bodies take a beating and any ex NHL’er will tell you their knees hurt or their hands will never be the same and my personal favorite, “my back is a mess”. It’s a price to pay but after a career is over the player smiles and thinks “wow that was fun”.
Hitting is part of the game. Two players face to face hitting one another reminds me of warriors in battle; spirit versus spirit, muscle versus muscle and mind versus mind. It’s a beautiful thing. There is something majestic about two willing combatants, risking life and limb for personal reasons and for entertainment reasons. For the most part, the players are fine with face to face hits, face to face collisions and are against blind side or cowardly hits. The big hit is more exciting to me than fights.
Hits that are legal and that are violent are downright artistic.
I use to do it and it doesn’t hurt as much as you think. The one hitting usually doesn’t get hurt and the one getting hit does; too bad so sad. For the most part, the gear guards you and no one gets injured. People get hurt when the hit is on the head. People get hurt when the hit is unexpected and near the head. As said before even the dirtiest player will tell you hitting someone that isn’t able to protect themselves is ‘greasy’ and should be abolished. It’s true, oh, it’s true. Even the Tiger Williams’ or Tie Domi’s of the NHL have ethics.
The NHL needs to change the attitude of the players so they understand their consequences of their actions on the ice. Players know there are no punishments per say for a nasty hit and so if a player truly hates that other player, he doesn’t care if he hurts him. The hitter shrugs his shoulders and thinks he will take his chances with a suspension so long as he gets that player back for whatever he did earlier in the game.
The way to make the players care is through changing attitudes and developing discipline. Hits will continue to occur, but it will sure cut them back.
In Korea a person is charged based upon the damage they do in a fight. So even if you started the fight but don’t win you are not as guilty. If you beat the other person up real bad, you are charged more severely. You are responsible for your actions even in a heated moment. This restrains individuals from going beyond reasonable force. Food for thought NHL.
This brings me to a short point about the Matt Cooke situation. I can name three recent hits that were nasty blind side hits that warranted some sort of suspension. The reason? They were greasy, dirty, cowardly hits that were fueled by disrespect.
Many players will tell you that respect is not a part of the game anymore. Players don’t like one another and don’t respect their opponent’s bodies and health.
I sound like a broken record as I wrote about Patrice Cormier a while back and respect was the major issue their too. Certain players have disdain for their opponent and will do whatever it takes to hurt them. Matt Cooke, unfortunately, is one of these players. He has very little respect for his himself and his actions, not to mention his opponent.
The NHL has dropped the puck on this one. There have been many straws that have broken the back of the camel; Richards, Cooke, Hunter, Stevens, Kessler blah blah etc etc.
I should be able to remember great goals and great games, not dirty hits that nearly ended or ended careers. In a man’s game where being macho is as important as being skilled, the NHL is the biggest wimp ever. They can’t/won’t control their own league and own game due to what? Red tape? Pressure from the NHLPA?
Wannh…whine…boo hoo. Suspend him already! He tried to hurt Savard. He hit his head flush and with no body contact whatsoever. No warrior attitude, no honorable actions.
Why is the NHL being so lax?
The same reason the players commit dirty hits; no respect for the players.
Steve Betts is the colour commentator for Dalhousie Tigers hockey on ssncanada.ca and a regular contributor to Haligonia Sports.