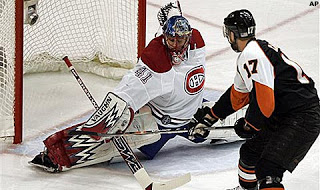 Editors note: My apologies to Henry for not getting this up sooner.
Bill
Well, it’s time to get back on track and get some predictions right. I know most of you out there are wondering why I even bother, with a great record of just 6/12 so far, you’d think I would give up? Stick with the 50% and go home. However, this round I’m going to give ‘er and take a chance on teams that I have yet to believe in.

So without further adieu, here are my Round 3 Semi-Final Predictions:

Philadelphia (7) – Montreal (8) – Yes. That’s right. We’ve got a matchup of the last two seeds in the east to crown an East Champ. Montreal has beaten two of the NHL’s best teams so far in these playoffs and have jumped on the back of excellent goaltending by Jaroslav Halak to prove all pundits wrong. On the other hand, the Flyers struggled into the post-season and had to complete one of the toughest comebacks in recent memory to beat the Boston Bruins after going down three games to none. Both teams went to seven games in the last series and will be pulling on everything they have left to get an edge.

In net it’s a showdown of Michael Leighton (Until Boucher comes back) and the suddenly infallible Jaroslav Halak. If the Flyers can get into the head of Halak and push him around they might have a shot, but it won’t be easy.
It’s time to jump on the bandwagon and support Canada’s teams, not just because it feels right but because they are the best team in this series: Montreal In 6.

The West – Chicago ripped apart Vancouver in their series and the San Jose Sharks made short work of Detroit to reach this point.

San Jose (1) – Chicago (2) – Unlike the East, over in the West the top two teams have made it through the gauntlet and now face each other.

A high-powered regular season offence has finally shown life in the post-season for the Sharks and the young talent of the Blackhawks have been getting it done on the back of a young finish goalie.

Where the playoffs have been full of unexpected surprises, these two teams are the best in the West and deserve to be here. Joe Thornton finally showed up and will be the catalyst for the Sharks to get to the finals, however Duncan Keith will be draped over him like a bad wig and will try to shut down the big forward.

This series is tough with so much talent, but I feel that the Sharks will get under the skin of the young Blackhawks, taking this series.

My Prediction? The San Jose Sharks win in Seven.

That means the Stanley Cup will look like this:

It will be a matchup of David verse Goliath proportions, well, if I am right for once.

–
Henry Whitfield is an avid sports fan who covers everything and anything in the sports world, while focusing on hockey and football. Follow him on twitter @HenryWhitfield.