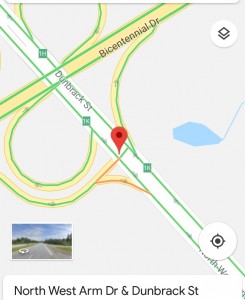 The Halifax Regional Municipality is advising residents that beginning Monday, April 29, North West Arm Drive will be renamed as part of Dunbrack Street.

The provincial Department of Transportation and Infrastructure Renewal is currently undertaking an interchange upgrade between Highway 102 and Highway 103. As part of this project, the province has requested that the municipality rename the provincially owned North West Arm Drive. This change affects the stretch of road between Main Avenue and Old Sambro Road (see attached map).

There are no homes along the new part of Dunbrack Street, so no address changes are required. However, notification letters are being sent to residents who live on streets that branch off the soon-to-be phased out North West Arm Drive to alert them to the changes.

Residents in the area should be aware 9-1-1 emergency services has been notified of the street name change and operators will be cognizant of the change when taking information from citizens and directing first-responders to the area.

While the province requested this change, it does align with municipal civic addressing policies.

The expansion of Dunbrack Street takes effect on Monday, but there may still be a transition period for signage while the province works on erecting new signs.

North West Arm Drive to be renamed as part of Dunbrack Street
https://haligonia.ca/north-west-arm-drive-to-be-renamed-as-part-of-dunbrack-street-260642/