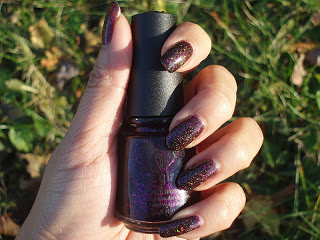 Do you know how beautiful China Glaze Golden Enchantment is, if you have it, and how equally beautiful it could make some other nail polish? Check this out!
I was looking for something dark to wear and opted for China Glaze Mummy May I. As you all know, I don’t wear nail polish seasonally (i.e. I wear anything anytime, depending on my mood, not the season). And Mummy May I did not disappoint, but there is a reason this post isn’t about it. 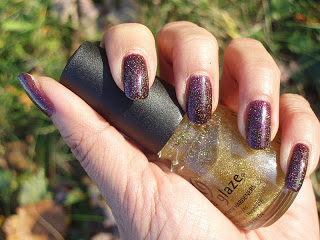 Well, the first reason is it isn’t a new shade and you all have seen tons of swatches of it all over the blogs. I wasn’t planning to post NOTD of it, originally.
Another reason is another nail polish had stolen the show – China Glaze Golden Enchantment.
This is one of the very first few China Glaze shades I bought when I started out with nail polish a few years ago. Back then, special effect shades weren’t that popular, so everyone had to own it.

If you missed the boat on it, Golden Enchantment has sparse gold glitters in a clear base, like you see in the bottle of the second pic above. Nothing extremely exciting, I know.
When it comes out in the sun to play, it is a totally different story, and I didn’t know this until very recently. The glitters actually shine in lots of colours – I can count red, fuchsia, green, gold, silver, and counting.
I was overwhelmed, and swore right there and then I would never abandon Golden Enchantment ever again. Now I’m wondering its cousin, Fairy Dust, would have the same effect in the sun. Have to test it ASAP.

More pictures, cause I simply can’t have enough. A little blurry this time.
This feels like a city’s night light horizon, or a Christmas tree with all the lights twinkling. I might have to wear Golden Enchantment again this holiday, hoping for some sun then.
Talking about the holiday, I am in stressful mode since the weekend, worrying about packing and everything that’s left to deal with when you go away for a few weeks – pet sitting arrangement, mail/ packages pickup, bill dues, last minute gift purchases, etc. I love being with my family but am always stressed before I can actually make it home.

Last pic, I promise, with extreme blurriness. If I only show you this and ask you to guess the nail polish, would you say it’s all Golden Enchantment‘s doing? I wouldn’t, before this post 🙂
Anyway, posts will be off schedule from now on, until I’m all settled at home with good company and good food. Hope you are sticking around for vacation-oriented coverage 🙂