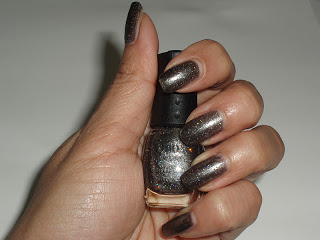 It feels a little funny having a NOTD post up today instead of Weekend finds as usual. It was a really lazy weekend, I did not do much shopping but lived vicariously though people’s IMATS Toronto hauls over the weekend.
But it is a good NOTD, hope you guys are ok with it 🙂 This is Quo by Orly Cold Stone, a brown-based charcoal with multi-coloured shimmers. In the bottle, at certain angle, it looks almost holographic but that did not transfer to the nails. 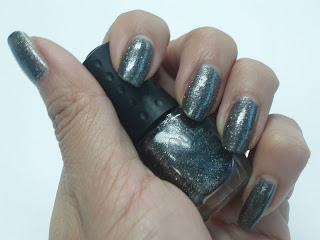 The flash in the first pic brought out the metallic sheen of the shade, but most of the time, it looks like the pic on the left here. Deep, dark, shiny, like a robot armour. I used 2 coats for this, good coverage and application, as always.
When the sun hits it, the shimmers show up better but nothing overwhelming. I wasn’t able to catch the sun light for a pic, sorry about that (and the tip wear too). The new base coat I’m testing out doesn’t seem to work very well at the moment.

Do you see the coloured shimmer in the bottle here? I wish there were more of them so the nails look more festive.
All in all, as long as you don’t expect holo sheen or intense colourful shimmers, Cold Stone is a good dark gunmetal colour to rock. I didn’t want to cover the shimmers by a flakie or glitter top coat, so I left it as is.
I’m hoping Quo by Orly will come out with flakies or duochromes next year, we are so deprived.