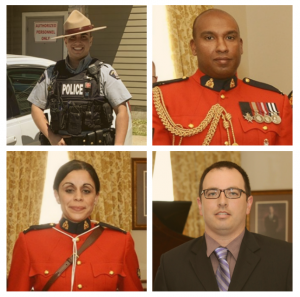 Nova Scotia RCMP members were honoured withLife-saving Awards at the St. John AmbulanceInvestiture and Awards Ceremony at Government House in Halifax on Saturday, May 25.

Award recipients Csts. Devran Damla, Jeffrey LeBlanc, Christine Pelly and Cpl. Deepak Prasadaccepted National Silver Awards for saving or attempting to save a life through the application of first aid knowledge and skills, where no risk to their life exists.

“Every day, RCMP members use their skills and training to protect Nova Scotians and preserve life,” says Nova Scotia RCMP Commanding Officer, A/Commr. Lee Bergerman. “I am proud to see our members honoured with St. John Ambulance Life-saving Awards and I hope they know how much of a difference their selfless actions have made.”

Csts. Devran Damla and Jeffrey LeBlanc (General Duty Constables, Yarmouth Town Detachment)
On January 19, 2019, Csts. Jeffrey LeBlanc and Devran Damla attended the scene of a single vehicle rollover collision on Hwy 103 near Yarmouth. Cst. LeBlanc assessed a 70-year-old​ man and a 71-year-old woman trapped inside the overturned vehicle. Cst. Damla joined Cst. LeBlanc at the scene and the members determined that the driver needed to be freed immediately. They pried open the vehicle’s door using their batons and Cst. LeBlanc freed the man from his seatbelt. Cst. LeBlanc began CPR and Cst. Damla updated dispatch. EHS arrived on scene, extracted the passenger from the vehicle and took over care of the driver.​ Both people survived.

“At St. John Ambulance, we train people in life saving skills including our partners at RCMP who are front line responders in very difficult situations. We publicly recognize people who save or attempt to save a life in the hopes that others will have the confidence to act when they are called upon as well,” says Steven Gaetz, CEO St John Ambulance. “We thank the members of the force and encourage everyone to be trained and to act when the need arises.”

Each year at Government House, the St. John Ambulance Investiture and Awards Ceremony recognizes outstanding contributions by volunteers, instructors, staff, community, and organizations who have shown exemplary dedication and commitment to contributing to the mission of St. John Ambulance to improve the health, safety, and quality of life of all Canadians.