Now that it’s just about over, I have to get back to reading. The pile is getting bigger and those books won’t read themselves. Maybe some gold, silver and bronze winning books will be just the thing.

The RITA Awards are governed by the Romance Writer’s of America, recognizing excellence in romance writing fiction. 2009 winners included: 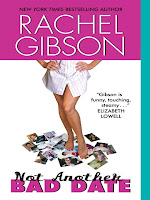 Best First Book – Oh. My. Gods. by Tera Lynn Childs. “A modern girl’s comedic odyssey in a school filled with the descendants of Greek gods. … And now they’re on her track team! Armed only with her Nikes and the will to win, Phoebe races to find her place among the gods.” –From the publisher.

Best Contemporary Single Title Romance – Not Another Bad Date by Rachel Gibson. “What does a gal have to do to get a good date in this town? Adele Harris can’t even begin to answer that question. She’s had so many lousy dates that she’s sure she’s cursed. … Can a woman with her track record ever really believe that he’s serious this time..or is he destined to be date?”–Back cover.

Best Novel With Strong Romantic Elements – Tribute by Nora Roberts. “Virginia’s Shenandoah Valley is a long way from Hollywood. And that’s exactly how Cilla McGowan wants it. Cilla, a former child star who has found more satisfying work as a restorer of old houses, has come to her grandmother’s farmhouse, tools at her side, to rescue it from ruin. Sadly, no one was able to save her grandmother, the legendary Janet Hardy. An actress with a tumultuous life, Janet entertained glamorous guests and engaged in decadent affairs—but died of an overdose in this very house more than thirty years earlier. To this day, Janet haunts Cilla’s dreams…..”–Inside jacket.

Way back in the eighties the awards were known appropriately as “Golden Medallion Winners” and included The Endearment by LaVyrle Spencer and The Heart’s Victory and Untamed by Nora Roberts.

In the world of western fiction there are the Spur Awards (I’d prefer the “Silver Spur Awards”). These awards are presented by the Western Writers of America for distinguished writing about the American West. Recent (2008) winners have included:

Best Western Short Novel – Another Man’s Moccasins by Craig Johnson. “When the body of a young Vietnamese woman is found alongside the interstate in Absaroka County, Wyoming, Sherriff Walt Longmire is determined to discover the identity of the victim and is forced to confront the horrible similarities of this murder to that of his first homicide investigation as a marine in Vietnam.” –Publisher description.

Best Western Nonfiction Contemporary – Full-Court Quest: the girls from Fort Shaw Indian School – basketball champions of the world by Linda Peavy and Ursula Smith. “Peavy and Smith have collaborated on 10 books on women’s history and biography. In this volume they tell the story of the women’s basketball team at an isolated Indian boarding school at Fort Shaw, Montana at the turn of the 20th century. The team eventually brought its champion skills in the fledgling game to the 1904 World’s Fair in St. Louis. The authors profile the 10 team members who represented seven different tribes and supplement the surviving oral history of the team’s success with photographs, records, and archives from the school and other institutions.” – library catalogue

Best Western Juvenile Nonfiction – I Am Apache by Tanya Landman. “Taking readers on a sweeping and suspenseful journey through the 19th-century American Southwest, Landman tells a tale about a young woman who seeks to avenge her brother’s death by becoming an Apache warrior.” – library catalogue

The International Association of Crime Writers (North American Branch) has the Hammet awards in honour of Dashiell Hammet to acknowledge literary excellence in crime writing. Past winners have included:

2008 – The Turnaround by George Pelecanos. “On a hot summer afternoon in 1972, three teenagers drove into an unfamiliar neighborhood and six lives were altered forever. Thirty five years later, one survivor of that day reaches out to another, opening a door that could lead to salvation. But another survivor is now out of prison, looking for reparation in any form he can find it.” –Publisher description.

2007 – The Outlander by Gil Adamson. “In 1903 a mysterious, desperate young woman flees alone across the west, one quick step ahead of the law. She has just become a widow by her own hand. Gil Adamson’s extraordinary novel opens in heart-pounding mid-flight and propels the reader through a gripping road trip with a twist—the steely outlaw in this story is a grief-struck nineteen-year-old woman.”–Publisher.

2006 – The Prisoner of Guantanamo by Dan Fesperman. “Revere Falk—FBI veteran, Arabic speaker—is an interrogator at “Gitmo,” assigned to a “hold-out,” a Yemeni prisoner who may have valuable information about al-Qaeda. But these duties are temporarily suspended when the body of an American soldier is found washed ashore in Cuban territory…. An intricately layered, blistering tale of subterfuge and deception at the highest, most hidden levels of the government, and in the most intimate, and vulnerable, moments of individual lives, ThePrisoner of Guantánamo is as timely and razor sharp in its depiction of life—and death—at Gitmo as it is unstoppably suspenseful.”–Inside jacket.

I can’t think of what this award “should” be called … The Bronze_______ any suggestions?