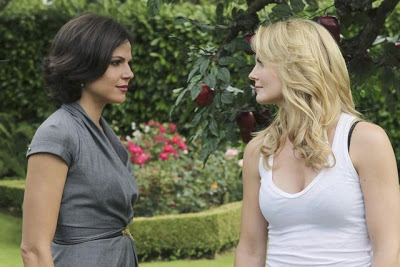 I can tell that Once Upon A Time will be hard to review, since there are two different worlds, sets of characters, and plots going on in each episode. After watching the second episode, “The Thing You Love Most”, I know two things for sure: I’m into this show enough to keep watching for now, and I much prefer the fairytale world to the one in Storybrooke.

To be honest, I think what’s preventing me from loving this show is the precocious moppet at its center. Henry is used to explain a lot, and I don’t know that the kid playing him is doing a great job of delivering all that exposition.

I mean, just look at what’s going on in Storybrooke. Emma stuck around because she was worried about Henry and his fantasy ideas about the town. She’s worried because his adoptive mother, Regina, is a bitch. (Also, Regina clearly has trouble identifying the difference between Red Delcious and Honeycrisp apples. Honeycrisps aren’t deep red and taste much, much better.) But have we really seen Regina pose any actual threat to Henry? No, she’s just cold. Meanwhile, Emma is the lunatic chopping down apple trees and listening to an overly enthusiastic child who believes his mother is an evil queen and his teacher is Snow White. Why? Because they all like chocolate and cinnamon and, oh I don’t know, why not believe him?

In fairtytale land we learned a little more about the Evil Queen’s backstory this week, which was rather delicious. I loved seeing her barter spells with Maleficent and seek advice from Rumpelstiltskin when her cure didn’t work. In order to successfully complete the curse and create a world where she’d have complete power, the Evil Queen killed her own father.

I think for this show to really succeed, it needs to learn how to have more of a sense of humor about itself. I like most of what’s going on, but Henry is a bit grating and everyone seems to be taking themselves too seriously. Right now this is a campy show that doesn’t know it’s campy, and it would be better off to just embrace it.

Once Upon A Time: Crazy For You
https://haligonia.ca/once-upon-a-time-crazy-for-you-47506/