A large scale province wide investigation has commenced this holiday season to identify a grouchy, green thief recently caught stealing from homes and vehicles across Nova Scotia. The suspect, who has been eluding officers, has been targeting vehicles and homes left unlocked and those with valuables in plain view.

“We need help from our citizens in cracking this case,” says RCMP Cpl. Dal Hutchinson of the Nova Scotia RCMP. “Reports are coming in from across the province of a person or people stealing from vehicles and we have solid suspect description but we need help identifying who this person is. They are out to steal Christmas if we don’t put a stop to it!”

A few reports are below:

· On December 9 at approximately 1 p.m. a citizen reported a hairy, green creature creeping around a shopping centre parking lot. The suspect rummaged through unlocked cars, removing shopping bags full of recent purchases. The suspect stuffed the stolen goods into several large sacks which they dragged away with some difficulty.

· On December 9 at approximately 8 p.m., someone described a similar hairy, green suspect rifling through cars in a different shopping centre parking lot. Several people who were parked there later reported thefts of cash, wallets, GPS units and gingerbread scented air fresheners from their vehicles. 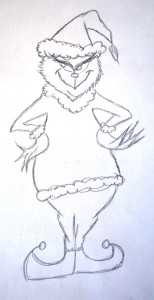 · On December 10 at approximately 11 p.m., a person arrived home to find a similar looking suspect in their living room. The suspect seemed startled and quickly scuttled away with the household’s supply of candy canes and peanut butter balls. The homeowner later noticed several wrapped gifts had also gone missing. 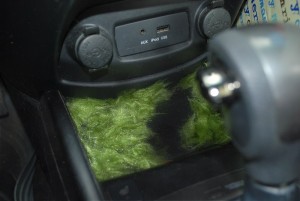 The suspect is described as approximately 5-foot-9 with an unusual abundance of green facial and body hair. In all sightings, they were wearing the same red and white suit, a red and white hat and elf shoes. The suspect usually walks with a distinctive gait, hunched forward at the waist. However, they have also been seen slithering along the ground in a snake-like manner.

RCMP is sharing two images that may help identify the suspect: a photo of a green, hair-like substance collected at one of the crime scenes and a composite sketch of the suspect based on witness descriptions.

“Theft from motor vehicles and residential break-ins are a year round problem,” says Cpl. Hutchinson. “This is why we need everyone’s help to stop characters like this by locking vehicles and homes, removing valuables from plain sight and reporting any suspicious behaviour and activity in your communities to police.”