[I’m pretty much down for the count this week due to doctor’s orders (no worries, it’s nothing that very short-term meds can’t fix) so here’s a lovely guest post from someone whose tweets I enjoy following on Twitter @ssmith. He’s also a supernatural fiction aficionado and wrote a great guest post over at (un) Death-Match. If you’re interested in submitting a story about the East Coast, please send me an e-mail at kimberly.aliasgrace [at] gmail [dot] com for guidelines.] 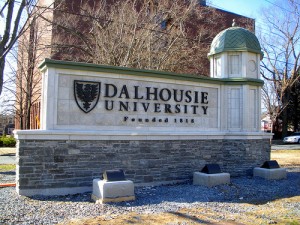 I’m not originally from around here. In fact, if you had asked me in high school where I was going to end up upon graduation, anywhere on the East Coast probably wouldn’t have crossed my mind. Like many students, I just applied to three universities in Ontario and left it at that. To me at the time, the east coast was a place I had visited at age 8 — not a serious destination for university, let alone long term habitation.

But then a few weeks later I was at a family reunion. Among the attendees was a cousin I hadn’t seen in a few years. We got to talking, and since he knew I was at the age where I was thinking about university, he decided to give me some advice. “Don’t feel like Ontario is your only choice. I went to university out east and had a blast. I wouldn’t trade it for anything”.

And so after, I started thinking about it. Picking up MacLean’s Guide to Universities, I started flipping through for information. And there under Dalhousie University, under popular majors, was Computer Science. So I applied — after all, why not?

On top of looking through the regular tourist/undergrad applicant information, I also had the virtue of knowing people and knowing people who knew people who had been or were currently living in Halifax. All these painted a wonderful vision of a city, and the more I learned, the more interested I became.

And then the Ontario university replies came in, with all three universities sending me acceptance letters. I spent a few days trying to make a decision on where to go, a decision which at that point was between my top Ontario choice, Waterloo, and Dalhousie. But then after rereading my acceptance letters for the umpteenth time, I realized I had overlooked something. Waterloo had accepted me for an honors math degree, NOT computer science, and the rules at the time indicated that I could not transfer to or complete a double major in Computer Science. Once I realized that, the choice was simple, and to Halifax I came.

I understand that this isn’t a rare event. A lot of Ontario students come out east for school. And then a lot of them head back in the summer to take advantage of Ontario’s higher minimum wage, or leave the province upon finishing their education. To be quite honest, that was the plan I had for myself. But at some point in that first year, that first year of being in the city instead of the country, of being able to just ‘drop by’ a friend’s place, of being able to just wander around when bored, of being able to explore, I decided to stay for the summer. Then I made friends, I put myself through school, landed co-op jobs locally, and eventually graduated and got a job here. Despite almost nine years, the city continues to come up with new things to be involved in, new experiences to discover, and as long as the coast continues to provide me with new and interesting things to explore…well, I guess I will stick around to explore it.

Living out east and having a blast. I wouldn’t trade it for anything.

Sean Smith is a late-twenties cyborg originally from Ontario. Arriving on the coast for the second time in 2001, he hasn’t quite gotten around to leaving. A computer programmer by trade, when not involved in things computery he is generally coming up with crazy ideas and trying to make them reality. Occasionally, he writes these ideas online. You can also follow him on twitter (@ssmith).

Out east, having a blast
https://haligonia.ca/out-east-having-a-blast-13074/