At approximately 12:35 am Halifax Regional Police responded to a robbery at the Boston Pizza located at 611 Portland Street in Dartmouth. Two men entered the business, one of whom produced a knife and demanded cash from staff. One of the staff members confronted the men and was assaulted. The staff member received minor injuries which did not require medical treatment. No money was obtained, however, a quantity of alcohol was taken. 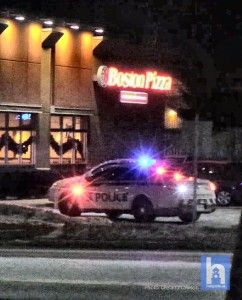 The first suspect is described as a white male in his twenties with short hair wearing a camouflage jacket over a black hoodie, black ball cap, blue jeans and white sneakers.

The second suspect is described as a white male in his twenties wearing a green and black hooded jacket, dark pants, and camouflage boots.

At approximately 12:51 am Halifax Regional Police responded to a robbery at the Needs Convenience located at 303 Prince Albert Road in Dartmouth. Two men entered the business and one of the men produced a knife and demanded cash and cigarettes. The suspects left the store with an undisclosed amount of cash. The suspect descriptions in this incident are similar to the robbery at Boston Pizza and it is believed that the two incidents are related.

Both robberies are being investigated by the Integrated General Investigative Section.