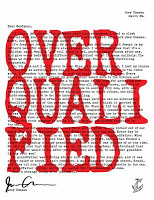 Resume and cover letter writing has got to be one of life’s more demoralizing tasks. In a cover letter you attempt to convince the potential employer that you are the person for their organization. You mold yourself and your experiences to meet their expectations. In Overqualified by Joey Comeau (author), Joey Comeau (character) writes cover letters for jobs for which he is wildly unqualified. He rationalizes his experience to match their jobs.

“Dear RAND,
I am writing to apply for job with the RAND Corporation. The first time I heard of the RAND Corporation was on The X-Files, the conspiracy-theory-heavy television show I was obsessed with in high school. I watched every episode. That was the beginning of my paranoia, my belief that there are huge corporations behind everything. That everything that happens in the world happens for a reason.“

There are threads of sadness throughout this often funny novel as he processes through his younger brother’s sudden and tragic death, sometimes imagining him to be still alive. His letters seem to be an attempt to find meaning in a world he appears to find frustrating and alienating.

Often the letters are entirely inappropriate with violent and sexual imagery. He recalls his childhood, imagines the future and is sometimes jealous and bitter. I was particularly amused by his letter to the Easy Rider Tours company proposing a “Nova Scotia Tour of Joey’s Ex-Lovers”:

“Coming up on the left, we find the bakery where my first girlfriend works. Laura. When we were fourteen, we both got really drunk and had sex. Raised as I was, with a strong sense of religious virtue, I stumbled out of her house, crying. I never thought … hang on here she is.”

Joey Comeau is also the author of a webcomic “A Softer World” The comics are insightful, hilarious, bizarre and inexplicable. His work has elements of transgressive fiction which features characters who break free of typical society in seemingly destructive ways (drugs, sex, violence). Because of this, the characters may be perceived as anti-social or mentally ill. If you enjoyed Generation X by Douglas Coupland, Fight Club by Chuck Palahniuk, and Geek Love by Katherine Dunn, this somewhat dark, troubled, funny novel might be for you. 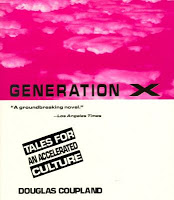