Finally got it to work! Sorry guys for the delay in my weigh-in day post! I couldn’t figure out why my second video wasn’t loading and it was because the setting was on HR and it was too big. Thankfully hubby saved the day and I’m now getting around to telling you about it! I apologize the quality isn’t where I would want it to be, but the only time I use “blogger” to create posts is when I have videos and there’s no editing options…pffffft. 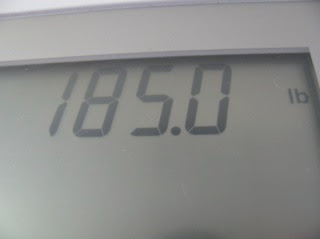 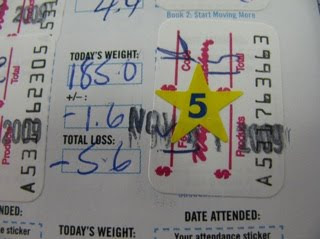 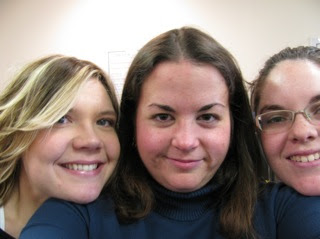 Now only the deets about the meeting! Today’s topic was about starting to get ready for the holidays and how to approach the upcoming season: 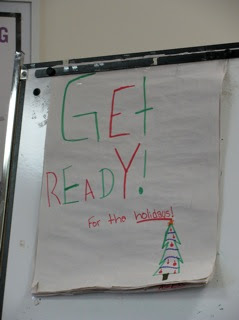 One of the things our leader raised is whether we were “thankful” to be a WW member right now. It sounds kind of cheesy, but honestly I truly am! I am so much more at peace with myself knowing that I am in the driver’s seat of finishing off my weight loss and “nothing tastes as good as being in control feels” 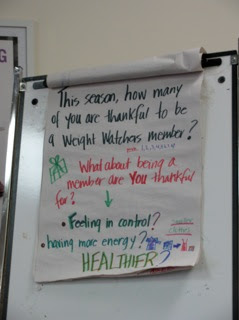 A few tips about how to manage the inevitable temptations: 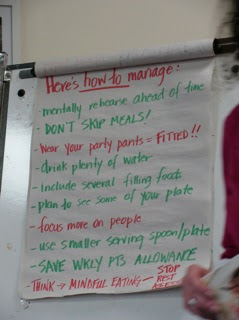 And then it was time for Lynn, Holly and I to head on over to Sobeys to support the @halifaxchicks with their fundraiser to raise funds for Bustamove. “Eat a pancake, save a boob.” 😀 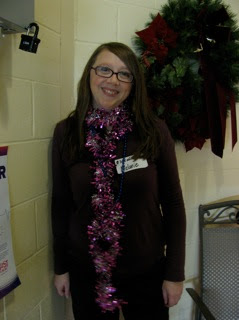 Why on earth did no one tell me my bangs were starting to go all Farrah Fawcett?? 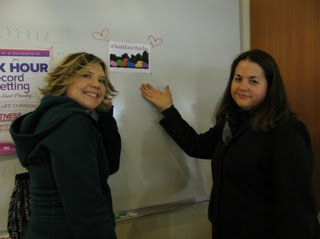 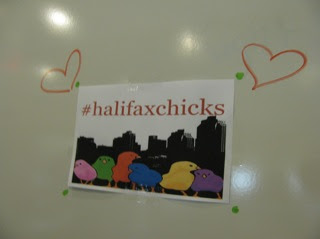 How fun is it going to be to have Richard Simmons leading in on the exercise for Bust a Move?! I wish I had of gotten my buns in gear to join these girls :-*( 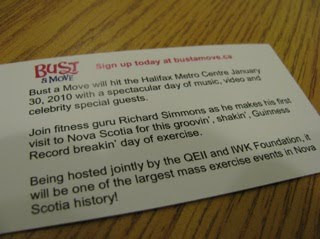 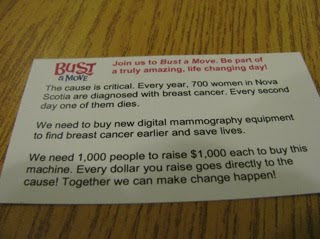 And of course the “important” part: 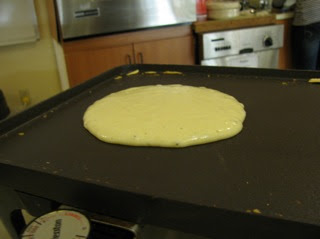 Oh and all the regular “Joes” got the “generic” syrup: 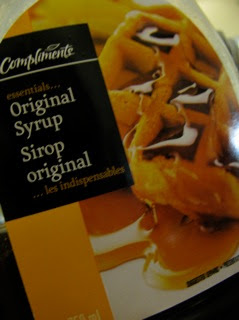 We had a secret password and got the “real deal” 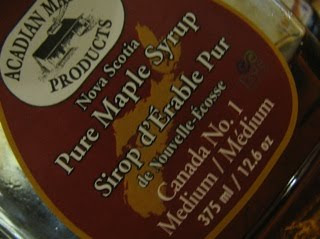 (It pays to know the right people 😉 ) 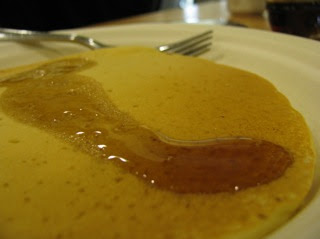 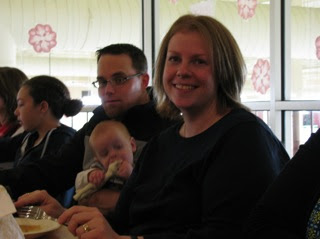 And just LOOK at that BANG of mine?!?!?! Like seriously girls, you don’t let a girl walk around with a boogie in her nose would ya?! 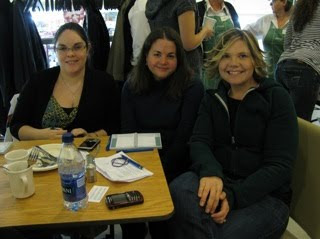 Then it was time to get prepared for my Pampered Chef guests to arrive at my house, so Holly and Lynn accompanied me back to my place to get some dips prepared for the crew: 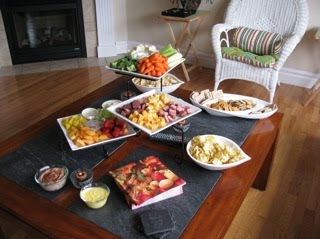 For some reason Lynn and I both missed getting a shot of the two cream cheese dips that we made! One of them was the shrimp dip recipe that I received from my aunt when they surprised us with a housewarming party and the other was a traditional nacho dip. I could hardly keep my hands away from them! It was a darn good thing that it was a new week with lots of time to cancel out that badness for next WI!

The punch I made was a Pampered Chef recipe called “Cran-Raspberry Fizz” and it was sooo goood! 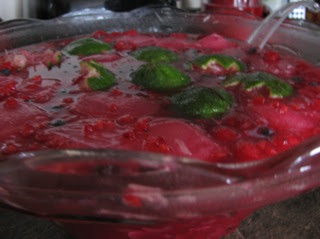 Susan got all set up ready to do her demonstration: 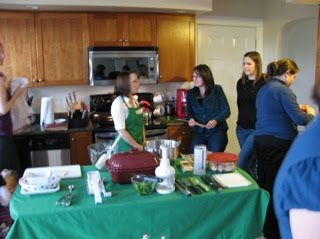 Lots of products to show us: 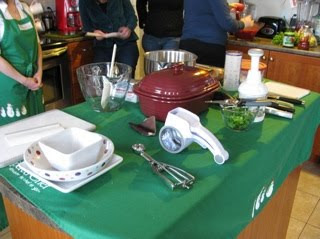 We made a recipe called, “Mexican Chicken ‘Lasagna'” which is made using the deep covered baker in the microwave and instead of using pasta noodles, you use flour tortillas instead! 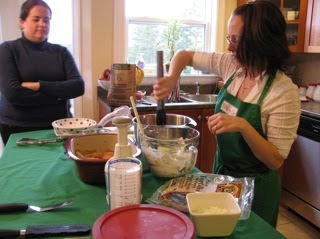 There was badness in the cream cheese for sure! 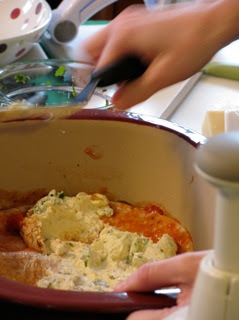 Bad it was tasty! Of course I was running around so I didn’t get many pictures, but the party was a success! We have left our order open for a few extra days for a few people who still want to place an order, and I am still trying to choose what it is I want! I’ve gotten a few great suggestions from you guys and we were really lucky that a few of our guests were well familiar with their products and had lots to recommend. Do any of you guys have any recommendations?!

(and P.S. since our order is still in fact open, anyone who lives in Canada can indeed place an order with our and our consultant will arrange to have it sent to you – shameless I know because I do get the perk of getting a percentage of the total sales for free, but I’m just throwing that out there! 😉 )

After that, my stomach was a little unsettled because over the last three weeks I have been treating my body the best it has ever been treated, pretty stellar with the eating and rocking the exercise, so it was interesting how just a moderate indulgence with those dips and that food made my stomach unsettled. The last thing I was in the mood for was exercise, but after it was all over Lynn and I pushed each other to go. We ended up killing it at the gym. I actually wanted to keep going, but heartburn was setting in hard with my stomach being unsettled and running on the treadmill, so I decided to pack it in. I ended up starting out in the StairMaster for 20 mins (first time ever tried it and I actually liked it!) then I ran on the treadmill for another 25 minutes (and I swear I could have kept going for a loong time after that. (I love that I knew I could do it). We finished it off pumping some iron then we decided we were going to enjoy a few glasses of wine!

We made the most amazing salad ever for dinner and I enjoyed 2 glasses of wine and a strongbow:

Oh and there was totally chocolate involved last night too! I decided to write off my flex for the week and focus on earning Activity POINTS for the rest of the week.

Tomorrow I have the day off!!! Woot!