So I was tracking my meals one day last week when I simultaneously remembered I had an entire head of cauliflower to use up in the fridge.  How’s this for a coincidence? 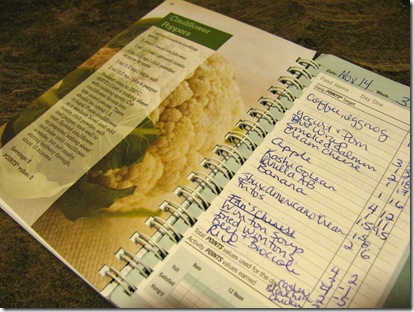 Here’s the thing:  I don’t really “like” cauliflower that much, but it was on sale at Avery’s Farm Market and I aint ‘fraid a no veggie. 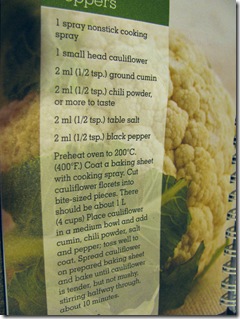 But this looked like a pretty good way to put it to use as a side dish, so in the oven it went: 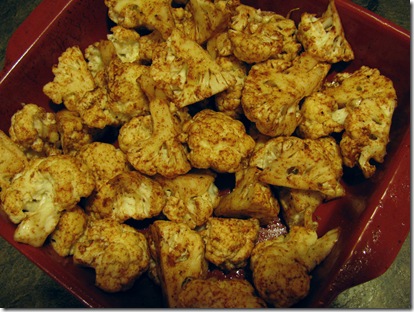 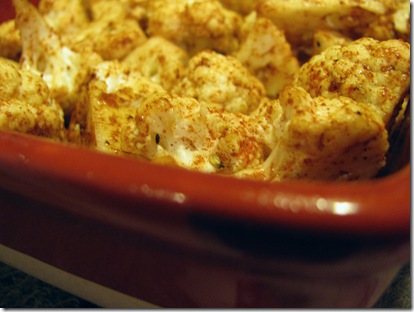 I also added some smoked paprika that I bought at the craft fair as well.  I had been wanting to pick up smoked paprika forEVER but just never came across any.  I’m convinced it was the secret ingredient in the chili I made a while ago which ROCKED even though I used frozen vegetables in it! 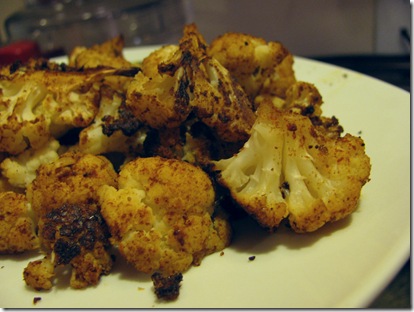 I’m sure if you like cauliflower this is a great recipe for you to try, but I dunno, it didn’t scream “popper” to me!

So tonight a bunch of us girls are hitting up Zumba again to shake our booty and get our sweat on.  I’m tellin’ yas we are going to have to fight the crowd to get our ticket for the class because since the class only accepts the first 30 people, we alone take up 25% of it!

I am looking forward to great workout and I really need it because yesterday I had a day off and I tried to go for a run, but my knee started shooting pains.  I had to walk.  I didn’t like that at ALL!  I have been feeling so great about being able to just pound out an hour of running.  Hopefully it was just a temporary problem and I won’t have any trouble with our Santa Shuffle coming up next weekend.

Plus I’ll be honest with you guys, I’m having a rough time this last week.  I stayed OP last week and did well on my WI, but I’m just not feeling it right now.  I’m already out of Flex for the week until Saturday and I feel like I’m  just Eyoring my way through it right now.  That’s what happens to the good ol’ motivational high that comes and goes.  I can still remember the incredibly motivated feeling I had just a few short weeks ago and I wanted to bottle it so that I could have some later when I needed it!

I just hope that I can get my head in the game again because a bad WI result certainly isn’t motivating!

I think I need to get organized to try some new recipes because that is always something that helps me feel good about being on track.