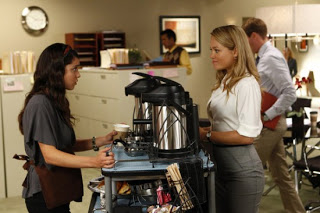 Is it OK if I begin every Parenthood review this season with a sentence about how happy I am it’s back for a third season? Because I’m really, really happy. OK now. Let’s talk Bravermans.

The episode’s title, “Hey, If You’re Not Using That Baby…” came from Julia and Joel, so let’s start with them. I was worried that a storyline about Julia trying to buy the coffee cart girl’s baby would be handled in a way that would make me uncomfortable, or make Julia really unsympathetic, but they actually handled it really well. I think this relied on two things – we’re really feeling Julia’s desperation, and everyone knows it’s a terrible idea. Joel told her it’s a terrible idea. And we love Joel. And I love Julia, and I understood why she was so tempted to ask. She just really, really wants another baby and she doesn’t believe it’ll happen for her if they follow the traditional path. So she caved and asked, and it was weird and awful. You could tell it was all she was thinking of as she developed a rapport with Zoey, said pregnant barista. You could tell she knew that a normal thank you for free legal advice is an on-the-house latte, not a baby. But she asked anyway. Zoey was disgusted and said no, which could make buying coffee pretty damn awkward for Julia. I really don’t know where this is going to go.

In more pleasant news, Sarah is falling in love with Mark! I just love these two so much, and I want them to live happily ever after even though I’m very worried that Seth will return and screw it all up. When Mark told Sarah she was in and she said she wasn’t sure, it was very reminiscent of Gilmore Girls for me. I almost shouted “say something” at the TV. So I was happy when I realized Sarah was only hesitating because she wanted to talk to Amber, not because she was pulling a Lorelai.

Speaking of Amber, we didn’t see much of her this week (and none of poor Drew), but we saw a lot of Haddie. God, Haddie is annoying. And the hair really isn’t helping. She and Alex broke the news to her parents about the charges that were being pressed thanks to the incident at the party, and then she learned that the situation is even more serious because Alex has a criminal record. I found it kind of surprising that Haddie didn’t know this. Alex’s whole policy is honesty, and you’d think after being together for a few months they would have had some deeper conversations about the difficult times in his life. Luckily, Michael B. Jordan is amazing and played the scene so well that I could suspend all disbelief.

The news about Alex was a lot for Adam and Kristina to handle, since they both have so much else going on. Even though I knew Adam would ultimately decide to go into business with Crosby, watching him make that difficult decision was compelling. He’s such a by-the-book guy and the practical choice was to go with the beverage distribution job. It didn’t matter that Kristina was being supportive, because the pressure was all from himself. I’m really looking forward to seeing the ups and downs of Crosby and Adam working together as partners on this.

The most heartbreaking moments in the episode, as they so often do, came from Max as he struggled to fit into his new mainstream school. While I find Kristina grating at times, I always feel for her when she watches her son flounder, and it was obvious that Max had some hurdles to jump over in this new school. The other kids think he’s weird, the teacher doesn’t seem patient enough with him or with Kristina and her nine emails. Even when Max did finally interact with some kids, it was bittersweet since it was Jabbar and his young friends. Will Max be able to handle this new school? Will he make any friends his own age? Does he need to?

What did you guys think of the episode?