I would actually pay money to be able to see next week’s episode of Parenthood right now. I need to know what’s going to happen! Guys! Last night’s episode was so intense!

That was way too many exclamation points for my own good, but I feel they’re justified. Last night’s episode of Parenthood just flew by, leaving me anxious, upset and sad. “Slipping Away” focused almost entirely on the two teenage girls on the show, Haddie and Amber, but in very different ways. Since I’m  not emotionally ready to discuss Amber yet, let’s start with Haddie.

Let’s Go All The Way Tonight, No Regrets, Just Love 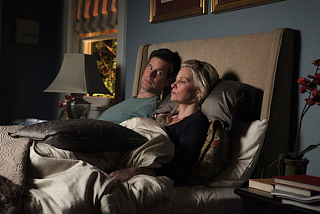 I have to say, I’m really happy (so far, at least) with how Parenthood has dealt with Haddie losing her virginity. It felt very Friday Night Lights, which makes sense since it’s a Jason Katims show, but it’s still rare. As I mentioned last week, I don’t like how television tends to turn teenage sex into a disaster every time. It can’t be done without major consequences like pregnancies, infidelity, crushed feelings, etc. It was refreshing to see a girl decide to have sex, feel comfortable about it, and actually talk to her parents about it.

The way Adam and Kristina found out that Haddie’s having sex, however, was humiliating and awkward for everyone. She basically pocket-dialed her parents mid-act, so when Adam picked up all they heard was a bunch of heavy breathing and moaning. Coming from their daughter. Ack! They almost got into a car accident.

It was a good call on Kristina’s part not to tell Haddie how she knew, though. Poor Haddie would have been mortified, and she was already having a tough time with the icy way Adam had taken the news. Instead Kristina just point blank asked her daughter. At first Haddie lied, and you can’t really blame the kid. She was caught off guard, she was uncomfortable, and she wasn’t sure what her mother’s reaction would be. But then she thought it over and told her mom the truth. Kristina took it very well and asked all the right questions, even though their conversation was brief. 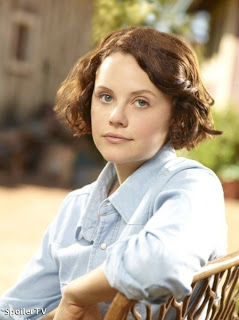 Adam did not take it so well. He never really talked to Haddie about it, which would have been majorly uncomfortable for both of them. But he pretty much stopped talking to her, period. I’m not blaming Adam, because it’s a difficult and uncomfortable situation. But the way he acted, barely even looking at her, was like shaming her. It was like saying “Now that you’ve done this, we’ll never be the same again”. No daughter wants to feel like that.

Both Adam and Kristina had nice moments with Haddie by the end of the episode. Kristina confessed that she’d lied to Haddie earlier when she’d said she was 22 when she first had sex. She’d been 15, and it had been a disaster. And she was glad it hadn’t been like that for Haddie. Adam’s scene with Haddie was dripping with subtext to the point of making me throw up in my mouth a little, but it was sweet nonetheless. He picked her up from soccer, bandaged up a cut on her arm, and told her he never wanted to see her get hurt.

I could have maybe done without the conversation between Sarah and Adam, but I get that the connection needed to be made there. They were both having issues with their teenage daughters, but one was far more serious than the other. Sarah had to give Adam a bit of a reality check. His kid is still his kid. She’s growing up, but that doesn’t mean she doesn’t need him anymore. And it can be so much worse.

We Can Dance Until We Die, You and I, We’ll Be Young Forever 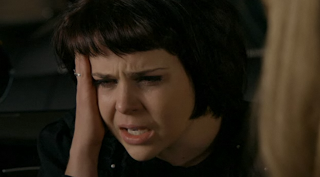 Oh yes, it can be so much worse. Last night’s episode featured the downward spiral of Amber Holt, ending with the serious car accident that we’d seen in previews last week.

I guess if I could buy this downward spiral from anyone, I could buy it from Amber. After all, we know that she had a lot of problems back in Fresno. She wasn’t trying in school, she had a loser boyfriend, she wasn’t doing herself justice at all. We also know that she’s very sensitive and vulnerable, so she took the college thing really hard.

First, Amber got high with the loser from Julia’s law firm at work and then made a big scene of quitting. Then she promised to have dinner with Sarah and talk about what her next year would be like and work out a plan, but instead she got more high with the law firm loser (OK, his name is Gary) at Julia’s office and showed up for dinner late and strung out. When Sarah asked “What kind of high are you?” my heart just broke. It was agonizing to watch her face, and Lauren Graham really killed all her scenes this week. You saw all her worst nightmares coming true, that the daughter of an addicted father might become an addict herself.

From there it only got worse. Amber found Sarah going through her purse at home while Drew was on the phone with Gary and freaked out. She ran outside and physically pushed Sarah to the ground when Sarah tried to stop her from getting in the car. It was painfully heartbreaking to watch, and I don’t know how I’ll ever be able to look at Amber the same way again.

Over the past season, Drew has had some good moments with both his dad and his grandfather. But we’ve never really seen him interact a lot with Sarah. Both the scene where he tried to give his mom any information about Amber that could help, and when he knelt at her side after Amber pushed her, were very moving.

Sarah was physically fine, but not emotionally. She told Adam she wasn’t sure that Amber would come back. She knew Amber was on more drugs than pot and was worried about her safety – as she should have been. As Amber sped down the road in the passenger seat of Gary’s car and they passed a flask and a joint back and forth, he ran a red light. I wish we hadn’t seen the car crash in the promo the week before, because it would have had a much bigger impact had it been a surprise. Instead, we knew what all of Amber’s behavior was leading up to. I know NBC is trying to draw in viewers with splashy promos and commercials, but as a regular viewer it is so much better to only get a small taste of what’s to come, not a summary of the whole episode.

Obviously Amber is not going to die – Parenthood wouldn’t do that to me, I’m sure of it – but things could be very serious. I want to think that a terrible accident will put an end to all of Amber’s reckless behavior, but anything could happen. Her self-esteem could take a real hit here, knowing how she acted towards Julia and her mom, and knowing that she almost got herself killed. Since next week is the season two finale, that’s something we likely won’t find out until next fall…assuming this amazing show gets a third season. (Can you hear me yet, NBC?)

So much of the show focused on Haddie and Amber (and I’m fine with that) that we didn’t see much in other developments this week. Sarah used her charm and tenacity to get her play read by a Berkeley bigwig and accepted into a special reading series. If you just started watching the show now, you might think this is ridiculous. But I can buy it, based on what we know about Sarah. Her character is supposed to be talented and creative and smart, and I think we’ve been building on that since we met her in the very first season. She threw all that away for John Corbett, and now she’s actually giving herself a shot. Unfortunately, her lucky break it coming right as her daughter completely breaks down.

I liked how Julia was stuck in the middle of the Crosby/Jasmine situation this week, since it gave that storyline some fresh perspective. Julia wants things to work out between the two, and she wants to support Crosby’s hail Mary pass. But now she knows Jasmine won’t go for it and Crosby won’t listen.

Next week everything will come together as the whole family needs to be at the hospital with Amber. Jasmine will be there, but if this family crisis sparks a reunion and not just a lovely “We’re family, no matter what” moment, I’ll be annoyed. Also? Ten bucks says that pregnancy test is not Haddie’s (Do you think it’s Kristina’s? That would be a handful.) but if it is, I’ll lose it. I’ll also lose it if it’s Julia’s. Do not rob her of a good storyline by giving her a miracle baby.

All in all, I cannot wait for next week’s episode. What do you think will happen? Will Amber face any serious challenges from the accident, or will she just be laid up for a while? Do you think this is rock bottom, or will her recklessness seep into season three?