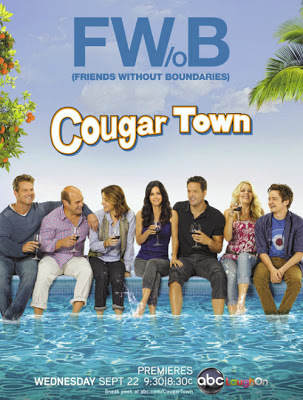 I don’t know if you heard, but shortly after Christmas I fell in love with the show Cougar Town. So what did ABC do to me just when I’d joined the Penny Can bandwagon? Oh, they aired a couple of new episodes and then tore the show away from me in an attempt to make Matthew Perry happen. Not cool, ABC!

OK, I do actually like Matthew Perry. Courtney Cox probably does, too. And I’ve been watching episodes of Mr. Sunshine on Netflix and it’s OK. But it’s no Cougar Town.

Well, the wait is over. Cougar Town returns this Monday, April 18. Yes, you read correctly. Monday. And then another new episode will air on Wednesday, April 20, so plan your television schedule accordingly. (What, you don’t make up an excel spreadsheet of TV shows every week? Neither do I…no, seriously. I only do it at the beginning of each TV season. Totes normal.)

Since Bill Lawrence  tweeted “Hey ABC, what’s the plan for telling people Cougar Town’s coming back on, because it’s apparently not promos. My parents don’t even know” this morning, I thought I’d do all my Cougar Town fan readers a favor and give you the heads up. So there you go, and start getting excited!

The Return of Penny Can!
https://haligonia.ca/the-return-of-penny-can-36313/