As promised, here begins the recap of my fabulous vacation in the South of France. Before we get there though…

Cokebaby and I took a direct flight to London because when you live in Halifax you’re limited in your flight choices to Europe unless you want to backtrack to Toronto/Montreal/New York and lose an additional 2 hours there, 2 hours waiting, and 2 hours back this way. That’s without delays. No thank you.

In London, instead of sticking around for a connecting flight we decided to take the Chunnel to Paris for an overnight before meeting with Cokebaby’s sister and family in a village called Le Thor. We’d been to Paris once before. That was in the years when smoking was permitted at the airport which meant we were greeted immediately by that awful stench of stale nicotine. Apart from that, and unscooped dog poop, it was a lovely city then and a lovelier city now (less smoking in public spaces and more diligent canine overseers).

Paris, like Toronto, has something of a reputation to the neighbouring towns and countries. Even en route to the city the British man traveling next to us with his teenage daughter made rather an unkind observation about Parisians. I can’t say that I agree. We really didn’t have any trouble or experience unpleasantness. Maybe that’s partly to do with our ability to get by in the French language. By no means are we fluent but at least we gave it a try, sometimes more successfully than others. I equate it to those years I spent working in retail when American tourists expected to get change back in their currency. When in Rome…

In any case, Paris. We were there for my birthday! We spent the day walking around, taking in familiar sites, eating, drinking, and just taking it easy. That’s the great thing about revisiting a city. There’s no pressure to try to fit it all in. We even made an attempt to see the Catacombs but it was too late in the day and the line too long so we wandered off. Here are a few photographic highlights: 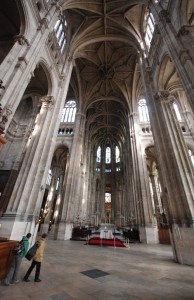 Reminds me of Pillars of the Earth by Ken Follett. 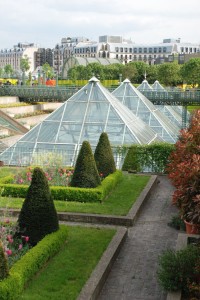 Most of the area around Forum des Halles was under construction. 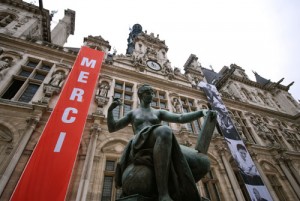 The building housing the City of Paris's administration. 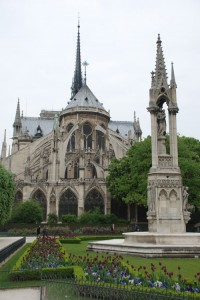 A view from the east garden. 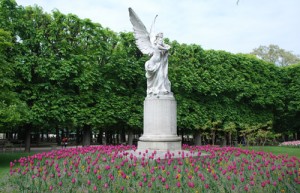 One of many sculptures. 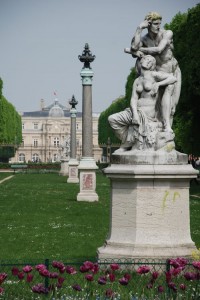 Another statue and series of columns in front of the Palais du Luxembourg.

Next week: Le Thor and the villa, Avignon, and some ancient hill villages.