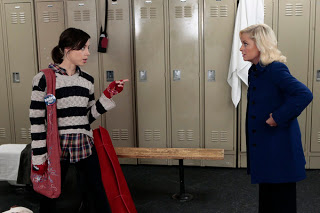 Having a lot of heart can often get you pretty far, but as Leslie Knope and her campaign team realized in last night’s epsiode “The Comeback Kid”, sometimes you also need someone who knows what the hell they’re doing.

The episode, which was (as always) fantastic, saw Leslie relaunch her campaign for city council with her new support team – which did not include Ben since, considering the scandal that sent Leslie down this road in the first place, would be poison to her campaign. 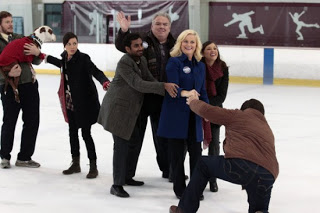 They immediately started hitting problems, from transporting supplies to Leslie’s first event to discovering that the basketball court they’d planned on using was actually a skating rink. Even Pistol Pete, a high school basketball legend who Ann painstakingly convinced to support Leslie, ended up being a disaster – after finally agreeing to perform a slam dunk, he slipped on the ice and hurt himself. The entire disastrous event was made even funnier by the fact that Leslie’s campaign song was “Get On Your Feet”, and it kept playing and the most inopportune times.

Meanwhile, Chris went to visit an unemployed Ben, who he immediately diagnosed as extremely depressed. Chris has been somewhat of a villain (in the nicest, most well-intentioned way possible) this season, so it was nice to see him put into a situation where he was getting to be the good dude he actually is. He was horrified to discover that Ben was spending his time making calzones (I can’t tell you enough how much I love the running calzone gag) and making claymation videos. Ben realized how dire the situation was as well, when he discovered that the video he’d spent weeks working on (“Requiem for a Tuesday”) was approximately four seconds long.

In the end, Leslie realized that scandal or not, she needs someone who knows what to do and that person is Ben. Ben, realizing that he needed something to do, agreed to take over as campaign manager.

There were so many funny lines and moments in this episode, I feel like I should watch it again – not a rare thing, since Parks and Recreation is so consistently funny. What did you guys think? I’ve listed a few favorite quotes below, but there are plenty more so feel free to share your favorites in the comments.