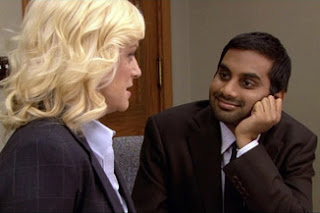 Thursday night’s episode of Parks and Recreation was, as always, hilarious. I think it’s time I look up some synonyms for hilarious because Parks & Rec is the funniest show on TV right now and I don’t think y’all will keep coming back here if I just proclaim it “hilarious!” every week.

The thing is, amusing, comical, gleeful and jovial don’t really do the show justice. Neither do laughable or witty. Maybe uproarious, but for now I’m sticking with hilarious.

The episode was called “Soulmates”, but it was really about forbidden love. Ben and Leslie. Leslie and Tom. Chris and red meat. All things meant to be together but forced apart. At least April and Andy are still going strong, right?

OK, subplot first – Chris challenged Ron to a cook-off in the spirit of his new healthy workplace initiative. I’m siding with Ron on this one, I think. Who do you think you are, employers? If someone wants to have a greasy, cholesterol-filled (Can something be filled with cholesterol? The way donuts can be filled with custard?) hamburgers for lunch every day, let them! You already take forty hours a week from us, don’t take the pleasures in life away as well! Despite all sorts of truffles and various expensive sounding oils, Chris’s lean turkey burger just couldn’t measure up to Ron’s plain and simple hamburger. Even Chris had to admit it. So Ron’s lunchtime hamburgers get to stay!

The main story, though, had to do with Leslie’s love life. Now Donna has helped Ann turn into quite the single gal, Ann has set her sights on doing the same for Leslie. She signed Leslie up for online dating, and she turned out to be a 98% match with someone she knew!

The obvious guess would be Ben, since they’re meant to be together. But I knew that would be too, you know, obvious. I thought it might be Chris, since he and Leslie are both so enthusiastic – but he doesn’t share her love for waffles. Then I thought maybe Ron, since they’re polar opposites and it would be hilarious. But the actual result was much better – Tom!

I loved Leslie’s clinical approach to trying to figure out why she’d been matched with Tom. She took him out to lunch so they could chat about their interests and what she thought to be true was confirmed – they couldn’t be more different. But once Tom realized that it was sorta-kinda a date he wouldn’t stop making fun of Leslie, so to shut him up she kissed him. And then we all learned something new – Chris is way against inter-office dating, especially when one of the people is a supervisor.

Aaaaand, that explained why Ben had acted so weird earlier when Leslie asked him out for dinner. He’d asked Chris about socializing with a government employee outside of work, and Chris shut it down. So for now, Ben and Leslie are relegated to sharing food underneath her favorite mural on the second floor. Because they’re soulmates.

I have to say, I really like the idea of Ben and Leslie trying to attempt a secret romance. I hope that’s the direction they go in. (Although I’m sure whatever they do will be – what’s the word? oh yeah – hilarious.) Leslie is so above board and by-the-book, it would be so funny to see her try and keep a secret like this. Plus, I really want them to be able to date.

What did you think of the episode? Now, check out these highlights and share your favorite moments: