I have one major problem with last night’s episode of Parks and Recreation: I wanted to see Leslie Knope in costume! I can’t believe they robbed me of that.

OK, first things first – Tom’s business is Done-zo. It was inevitable, but what better way for Tom to go out than by completely screwing things up for Leslie? Well, maybe not better, but funnier. Tom and Entertainment 720 organized a meet and greet for Leslie with local business owners so she could woo them for their votes. A good idea, except that everything at the party was way too extravagant and was branded with Tom’s face and company logo. Why? Tom had just gotten the news from Jean-Ralphio that the company was about to come over, and Leslie’s party ended up being his last desperate grab for clients. The event ended up being a complete disaster.

It all led up to a nice moment with Tom and a fully-clothed Leslie in the limo hot tub, where he confessed he’d run the business into the ground. It didn’t help that for the first two weeks of business Tom had told all prospective clients they were fully booked. Oh, Tom! I wonder if he’ll return to his old position in the parks department, or return in some other capacity? He did manage to salvage his relationship with Leslie by scoring her another meeting with the head of the Pawnee Chamber of Commerce, and by making her a very touching biographical video. (The year was 1975. It was a time of trouble. Watergate, Vietnam. Peter Gabriel leaves Genesis. But then, a ray of hope: Leslie Barbara Knope…) 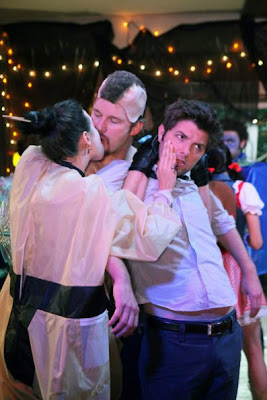 Meanwhile, Andy and April decided to host a Halloween party without getting an OK from Ben first. And being the passive-aggressive WASP he is, Ben wouldn’t come out and say what was bothering him. This storyline was my favorite because not only did I get to see people dressed up in funny costumes and interacting outside of the office (always one of my favorite things), but we got another glimpse into the unlikely roommates relationship of Ben, Andy and April. Andy, who grew up with five brothers, just beat up Ben and kept him in a headlock until he finally expressed some anger. 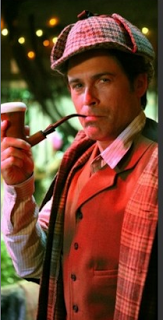 I loved the costumes this year. Andy was UFC star Chuck Liddell, who I’ve never heard of. April was my favorite, as a sumo wrestler who’d lost all the weight. Chris was Sherlock Holmes, Ann was an eggplant (why, Ann, why?) Ron was a pirate because he’s always a pirate, Donna was a cop and Jerry was Mr. Potatohead. The party also had two great subplots – Ann acted as Ron’s apprentice as he went around the home fixing everything that was broken or dangerous, and Jerry had to try not to throw up as he watched his daughter get frisky with Chris. This storyline is getting dangerously close to obnoxious – Chris needs to realize there’s a middle ground between shielding Jerry from his relationship with his daughter and full-on disgusting disclosure.

While not my favorite episode, I still found “Meet n Greet” to be delightful and chock full of hilarious lines and moments. Here are a few: