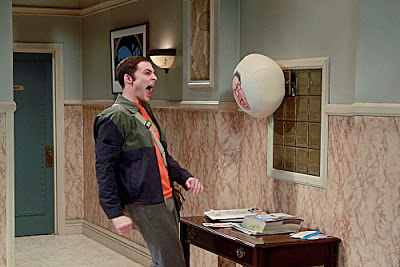 Ding dong, Leonard’s relationship with Priya is dead! Yippee! Now if that isn’t a Halloween treat, I don’t know what is.

OK, so they haven’t officially broken up. But after what happened in “The Good Guy Fluctuation” it’s only a matter of time. Leonard scored the digits of a hot nerd girl named Alice at the comic book store and made out with her – but he wasn’t ready to end things with Priya yet, either. He went to Penny for advice, who told him “Leonard, you’re looking for a way to sleep with both women and have everybody be happy about it.” I kind of expected Penny to chastise Leonard more for cheating, or wanting to cheat, or whatever, but instead she just helped him work through his feelings. I don’t think I would have been able to resist telling him that there was something inherently wrong with thinking he could one day marry Priya if he’s so desperate to cheat on her now. I mean, it’s not like marriage makes relationships easier.

Leonard ended up messing up in every way possible. If he really wanted to be with Alice (and he did), he should have recognized that as a sign that things are not good with Priya and ended the relationship. I’m not saying people should break up every time their eyes or thoughts stray, but this was a long time coming for Leonard and Priya – Leonard just lacked the self-awareness to know that. If Leonard really wasn’t willing to end things with Priya, then he should have cut off contact with Alice knowing that he wouldn’t be able to resist temptation.

Instead, Leonard kissed Alice some more and then in his guilt confessed his mistake to both Alice and Priya. Not only did Alice not want anything to do with a guy who’d cheat on his girlfriend, but Priya made the surprising confession that she too had cheated – she’d slept with her ex-boyfriend a couple of weeks ago. And this was so much worse. Not only did Priya cheat “more” than Leonard did, but she would have continued to hide it from him while Leonard was compelling to come clean for a smaller indiscretion. Leonard cut off their video chat before a breakup could happen, but since this is a relationship no viewers have been rooting for with a rather unlikable character, I’d say the final gunshot in this romance is coming up real soon.

Meanwhile, Leonard’s moral dilemma was lightened up by some good ol’ fashioned Halloween hijinks. After everyone scared Sheldon with a few harmless pranks, he tried his best to get even. Sheldon might be a genius, but an evil one he is not – he botched almost every single attempt to seek revenge. He was constantly outwitted as his friends turned the tables and pranked Sheldon with his own pranks. Sheldon freaked himself out by planting a snake in Raj’s desk only to discover that Raj was completely comfortable with the reptile. Sheldon tried to get Howard with a hand-buzzer only to be tricked into thinking the device had killed Howard – and there was the added bonus of Sheldon accidentally buzzing his own face. And when Sheldon finally did get his revenge, it was with the worst possible timing – he jumped out of the couch in zombie makeup only moments after Leonard learned of Priya’s infidelity. Missing the social cues as always, Sheldon yelled “Bazinga, punk, now we’re even!”

I thought this was a great episode – the writers did a good job of mixing in Halloween silliness with some important plot development. What did you guys think? And, here are some of my favorite quotes and moments: