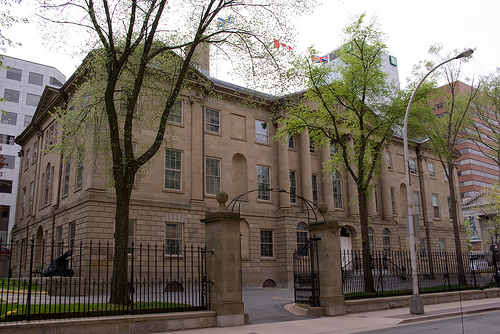 A report into pensions and other retirement benefits of Members of the Legislative Assembly was released today, Nov 3. The report, commissioned by the Speaker of the House of Assembly, recommends a number of changes to the pensions and benefits of elected officials.
The panel was appointed by the Speaker of the House of Assembly on May 5 and was given six months to complete its work. It was chaired by retired Supreme Court Justice David Gruchy. The other members were John Morash and Ronald Smith.
"I'd like to thank the panel for the work they have done on this review and for completing it in a timely manner," said Gordie Gosse, Speaker of the House of Assembly.
In conducting the review, the panel compared the MLA Pension Plan with the Nova Scotia Public Service Superannuation Plan, taking into account the difference in years of service. The public service plan is based on a career much longer than that of an MLA. Pension plans for MLAs in other jurisdictions also take into account this shorter term of service to arrive at a reasonable benefit formula.
The review panel also looked at the structure of MLA pension plans and retirement benefits in other provinces and territories. The existing rate at which a pension is earned per year in Nova Scotia of five per cent was the highest in the country. An accrual rate of 3.5 per cent is appropriate and in the middle of the range for MLA pension plans in other provinces and territories.
The panel recommended a number of other adjustments that it considers fair and reasonable:
— the maximum percentage of salary that can be earned as a pension should be reduced from 75 per cent to 70 per cent, which is the maximum available under a regular Nova Scotia public service pension
— the number of years an MLA must serve to be eligible for a full pension should be increased from 15 years to 20 years
— the earliest age at which a retired MLA can begin collecting a reduced pension should be raised from 45 years to 50 years of age
The panel concluded that the suggested reductions in pension benefits provide a pension plan comparable to those in other provinces and territories, and which is reasonable, given the work that MLAs carry out and the other opportunities they forego.
Other recommendations include:
— The formula for the transitional allowance under the House of Assembly Act be made consistent with provisions in other jurisdictions by adjusting the calculation factor to one month for every year of service, rather than 0.067 of one year, to a maximum payment of 12 months.
— Having a provision for third-party career counseling services to a maximum of $7,500 for MLAs who leave office, to help them re-integrate into the workforce, as provided in a number of jurisdictions. This would have to be approved by the Speaker in advance and would be paid to the counselor directly from the Speaker's Office.
— That changes come into effect for MLAs elected in the next general election and not be retroactive.
The panel also learned that there are 11 former MLAs or surviving spouses who are over the age of 65 and receiving very small pensions for service before salaries were increased, and recommended that there be a minimum pension of $1,000 per month.
The panel commissioned a report by actuarial consulting firm Morneau Shepell to guide the review. It also received 50 submissions from the public by e-mail and 11 submissions by regular mail, reviewed extensive literature, and spoke with past and current MLAs.
A copy of the report is available on the Assembly's website at http://nslegislature.ca/pdfs/people/pensionreview2011.pdf .
Source: Release