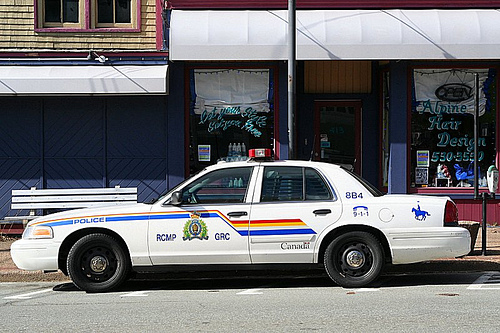 November 3, 2011, Halifax Regional Municipality (HRM) . . . RCMP Halifax Metro Traffic Services lay stunting charges for speeds over 180 km/h.
On Wednesday, November 2, 2011 at approximately 7:15 p.m., members of the RCMP Halifax Metro Traffic Services Unit were conducting speed enforcement in the Timberlea area of Highway 103.  A single motor vehicle was observed traveling at a very high rate of speed inbound near Exit 3.  The vehicle was clocked driving in excess of 180 km/hr.  Traffic on Highway 103 at this time was moderate to heavy.  The vehicle was stopped without incident.  The lone occupant of the vehicle, a 22-year-old male, has been immediately suspended from driving for a minimum period of one week.  The vehicle has been impounded and will be held for a minimum of seven days.  Upon conviction, the driver also faces a fine of more than $2400 and an automatic six points will be assigned to his drivers's record.
Stunting can be defined as traveling more than 50 km/hr over the posted speed limit.  The RCMP take these matters very seriously and view these actions to be one of the most dangerous forms of aggressive driving.  The RCMP continue to target this form of driving to prevent serious injury and fatal collisions in order to help keep Nova Scotia's roadways safe.
Source: Release: