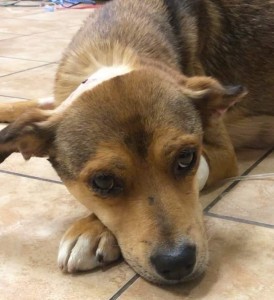 Meeka who captured so many hearts over the weekend has been released from intensive care and we are hopeful for a full recovery. If you would like to help with Meeka’s care, donate now at http://www.novascotiaspca.ca/ . You can note “for Meeka” in the comments section of the donation form.

Meeka will soon be with a foster family that can manage her special medical, dietary and social needs as she heals from her head trauma. On behalf of Meeka and all of our staff and volunteers, thank you for all the love and support!”

The RCMP and the SPCA advise the public the dog that was found injured inside the home and was transported to a veterinary clinic for treatment is in serious condition but is responsive and​ recovering, and we are hopeful for her full recovery. Police also wish to advise the public that vigilante justice will not be tolerated.​

The RCMP and the SPCA are continuing the investigation

On February 14, Pictou District RCMP responded to a report of cruelty to animals at a home located on Maple St. in Sylvester, Pictou County.

When police arrived at the home, they found an injured dog inside. The dog was in need of medical attention and was transported to a veterinary clinic for treatment.

The 55-year-old man was later arrested and faces charges of Causing Damage or Injury to Animals or Birds and Causing Animals or Birds Unnecessary Suffering. He was released from custody and is scheduled to appear in Pictou Provincial Court on April 15.

The RCMP and the SPCA are continuing to investigate this incident.​