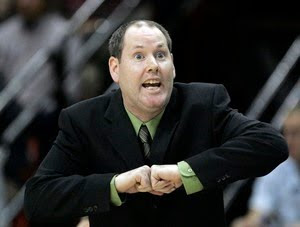 Gifts to Local Halifax Sports Personalities if I was Chris Cringle
Andre Livingston, Owner of the Halifax Rainmen– More Basketball Fans at Rainmen Games
Livingston has done his part to try and make minor professional basketball work in Halifax. The Rainmen brass have put together a very competitive package for the Halifax sports market; A competitive team, local players and coaches, charismatic personalities like Eric Crookshank and John Strickland, games that have an “event” feel, and television coverage. Throw in the Weather Girls, Puddy, and Little Nate, and the Rainmen provide a lot of value for the price of a ticket. With the PBL all star game in Halifax and a Rainmen team that should go deep into the playoffs, this could be the year the franchise makes it big. If not, the writing may be on the wall for Livingston that Professional Basketball is not going to work in a city that has been a Mecca for university basketball in Canada.
Les Berry, Head Coach of the Halifax Rainmen – A PBL Championship
With the amount of talent, depth, and diversity Berry has put together on the Halifax Rainmen, the coach may find himself being held accountable if the team does not make a championship run. Berry’s biggest challenge is going to be distributing playing minutes to a roster that can go 10 deep. The only friction could come from players on the cusp of the starting line-up or eight man rotation. Berry will probably not have to worry about dissention from players like Gary Gallimore, Devon Norris, and John Strickland. Strickland seems to relish his role as a 12th man fan favourite and third assistant coach, while Norris and Gallimore have to be thrilled just to be on the roster. As the season progresses the only thing that could keep this team from the playoffs is dysfunction and coaching. The latter is not likely with the well travelled Coach Berry, but he’ll find himself front and centre in blame distribution if the Rainmen season begins to go south at any point this winter.
Cam Russell, Head Coach and GM of the Mooseheads – Moose keep playing .500 hockey.
Having survived a 12 game losing streak that had gone far past the point of acceptance with the dedicated Mooseheads faithful and local media, Russell has guided the team to 8 wins. After losing 18 of their first 20 games, the Mooseheads have played .500 hockey and miraculously still have a chance at a playoff spot. The Moose even have a win over the Saint John Sea Dogs, far and away the best team in the Q. As Russell continues to build towards year 3 of his rebuilding project, he’ll need to win close to half of the team’s remaining games as a nice show of faith to Moose fans. Herd Nation has been patient to say the least with Russell, enduring a horrific season last year and hanging in there as the team looked awful in October. Russell keeps telling us the Mooseheads are on schedule and will be much better in the second half. For his sake he better be right, another extended losing streak and the local media might finally start putting the heat on Bobby Smith to make a change.

Trevor Steinberg, Head Coach of SMU Huskies Hockey– A Return to CIS National Championships.
After the Huskies collapse last year in the CIS Semi Final to Western, Coach Steinberg and his troops need a return trip to get the program back on track. The AUS champions have looked shaky at times this season but have managed to gain 21 points, good for third place in the AUS, the most competitive conference in the countr. St FX and Acadia have emerged as contenders for number 2 in the standings, as the three schools battle to become fodder for the undefeated UNB Varsity Reds in the AUS Final. However, a trip to the final would get Steinburg back to nationals and an opportunity for redemption from last year’s stunning defeat.

John Campbell, Head Coach of Dal Men’s Basketball – The Return of Josh Beattie to a Tigers line-up that has not received consistent play from 5th year senior Andrew Sullivan and athletic newcomer Mari-Peoples Wong.
Steve Sumarah, Head Coach of SMU Football– A recruiting class with size, size, and more size; Sumarah needs to beef up the lines so that the Huskies can avoid a third straight CIS semi final loss in 2010.
Ross Quackenbush, Head Coach of SMU Men’s Basketball – A fourth player to emerge as an offensive threat so that the team doesn’t have to ride their talented trio of Ikeobi Ucheqbu, Mark Mclaughlin, and Joey Haywood.
Halifax Lions– More butts in the seats at the Halifax Forum. The MJAHL team has played winning hockey the past 2 months and are slowly climbing the standings. However it has yet to translate into any dramatic increase in attendance. The organization does a lot of very good things and hopefully will turn the corner at some point.
Anna Stammburger, Head Coach of Dal Women’s basketball– A healthy Alex Legge and a late season push at a playoff spot. With Legge and April Scott back in the Tigers line up, expectations will increase on the struggling program as March approaches.
Gary Galimore, Halifax Rainmen – A season of good behaviour. The notorious hothead is still remembered for hitting a minor official last year in Cape Breton as an assistant coach at St FX. Gallimore got into a heated exchange with a Quebec player last weekend in a preseason game at the Metro Centre. Gallimore needs to avoid making the news for wrong reasons.
Pete Belliveau, Head Coach of Dal Men’s hockey– Goals. Belliveau’s revamped Tigers have struggled mightily to score. Tigers colour commentator Steve Betts has described the team as “three lines of Guy Carbonneaus”. Help is on the way in the form of Benjamin Breault, a five year player in the QMJHL who was a 7th round selection of the Buffalo Sabres.
Saint Mary’s Athletics- Webcasting. The Huskies may be the most renowned athletics program in Canada that does not offer webcasting of home games. Newscast.com covers the Men’s Hockey team but St FX, Dalhousie, Cape Breton, and UPEI offer extensive webcasting of all their programs. Dalhousie even covers swimming! Get in the game SMU.
ACAA Men’s Basketball – One team that can stay within 10 points of Rick Plato’s Mount Saint Vincent Mystics . MSVU has now about 100 conference games in a row.
Lesley Jordan, Head Coach of Dal women’s basketball – A Secondary Scorer- As her team tries to compete with Moncton and St FX for the AUS championship, Jordan needs another player to step up and help high scoring forward Jocelyn Leblanc.
Halifax Sports Fans- A Mooseheads playoff spot, a Rainmen championship, a packed Metro Centre for the Briar, and a return of championship basketball in March.
Merry Christmas friends!
bill@haligonia.ca
Twitter- haligoniasports
Facebook – CKDU Sports Nation