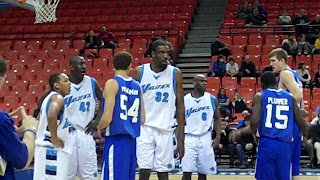 RAINMEN 128, FROST HEAVES 83
This wasn’t a pretty game by any means for the Vermont Frost Heaves.  Vermont struggled from the get-go as they could only manage to put up 13 points in the opening quarter and weren’t able to make a run to get back into it.  Vermont shot poorly in the first half (15 for 46) and by halftime, had a 29-point deficit to the Rainmen.  Halifax on the other hand, had their offense rolling with their 57% shooting which helped them land their third straight preseason win.

The Rainmen had eight players in double figures, including Tony Bennett who led the Rainmen for the third straight game with 18 points.

The Rainmen begin their regular season on January 3rd and make their home debut on Sunday, January 10th vs. Quebec. Haligonia.ca will have live coverage of all the Rainmen home games this season!


So the preseason is complete, who has impressed you the most with this new-look Rainmen squad?  Let us know and leave a comment below!