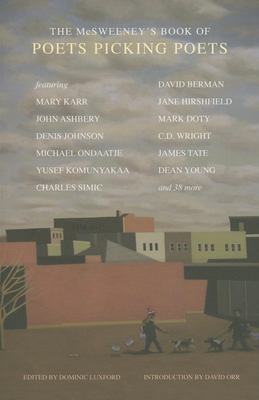 Okay, I’ll admit that I’m a bit of a sucker for literary gimmicks: that’s probably what drew me to the McSweeney’s Book of Poets Picking Poets.

Before I tell you about the book, and its gimmick, let me tell you a bit about McSweeney’s. It is an American publishing house that started in 1998 with the journal McSweeney’s Quarterly Concern. The first issue contained only pieces that had been rejected by other magazines. In the ten years since, McSweeney’s has built a loyal following, moved into book publishing as well as magazines while still aiming to highlight new and emerging writers. But in those ten years, it hasn’t really tried to publish poetry.

My last Poetry Challenge post talked about the fact that verse novels appeal to me. With these poetry chains, there is no single thread flowing through, so I had to find a new approach. So, I read for the flow, for individual images, and individual thoughts that made me smile or remember similar situations. And I’ll admit I rarely sat down and tried to figure out what the poem means; although sometimes, depending on the poet or the story they are trying to tell, it jumped out at me. One of the things I found most interesting was comparing the two poems by the same poet, as frequently the poem picked by the poet him/herself gave a very different impression of their work then the one picked by someone else.

So there were some poems I liked and some I didn’t. A few I loved: James Tate’s “The Radish” for me perfectly juxtaposed the beauty that can be found in a vegetable with the unnatural world of the grocery store; Patrick Lawler’s two poems where he speaks of himself in the third person say a lot about self-perception (one of those “Patrick Lawler writes about “Patrick Lawler” can be found here), and Jane Hirshfield’s “Theology” addresses the big questions of life through the actions of flies and dogs.

The McSweeny’s Book of Poets Picking Poets is available in book form, but was first available as part of issue 22 of the magazine McSweeny’s. The library has copies of both.