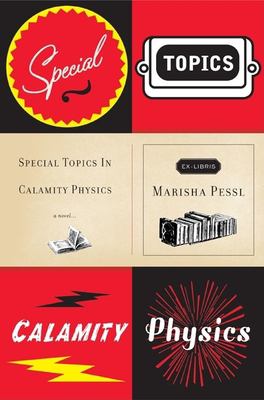 I was thinking about this book again this week: thinking of putting it on my to-read-again list for over the summer. It’s a first novel from a couple of years ago that I absolutely loved when I originally read it and I’m dying to see if it holds up on second reading.

Here’s the story (from a review I wrote back shortly after I read it):

“It’s senior year and Blue Van Meer – bookish, witty and self-aware – finds herself settling into a single school to finish off her high school career. Having spent a rootless youth devoid of friendships (thanks to her father’s string of visiting professorships at colleges across America), Blue is surprised to find herself quickly adopted into an elite social circle of intellectuals and uber-cool misfits at the prestigious St. Gallway School. Led by Hannah Schneider, the sort of charismatic and unconventional teacher who is a student’s dream and a parent’s nightmare, Special Topics in Calamity Physics starts as a darkly humourous coming of age story, but as the plot shifts after two mysterious deaths, becomes much more. Part who-dunnit, part teen drama, part tour through the literary cannon, this first novel is smart, sardonic and suspenseful. The high school drama is spot on, the mystery and characters are compelling. It’s well worth checking out – maybe even twice.”

The library has copies of Special Topics in Calamity Physics in both print and audio format.

It was reported last year that Pessl is now working on a second novel, tentatively titled Night Film and to be published by Random House (but not until 2010). I for one will be keeping my eyes peeled.

In the meantime, if you find that Special Topics In Calamity Physics interests you, you may also want to check out The Secret History by Donna Tartt which has similar threads in terms of the academic elements, the mystery and the plot device of the teacher/student relationship (although without the dark-humour) or Prep by Curtis Sittenfeld which hits the right tone for a comparison; also featuring a young, intelligent female main who is enrolled at an exclusive school and makes shrewd commentaries on the social structure around her (although without a mystery).