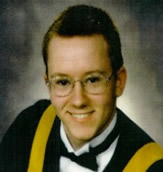 Today marked the ninteenth anniversary of the murder of Jason MacCullough and the Special Investigation Section of the Integrated Criminal Investigation Division continues to investigate the case.

Jason’s body was found on a paved path between 100 and 104 Pinecrest Drive in Dartmouth at approximately 2:30 a.m. on Saturday, August 28, 1999. There is no indication the 19-year-old was involved in any type of criminal activity, leading investigators to believe his death was a random act.

It is believed Jason was passing through the area while walking home and used the well-known short-cut between the buildings. Investigators believe there were several people in the area at the time of the homicide and strongly believe there were witnesses to the crime. Investigators continue to urge these people to come forward and report anything that they remember about this day, no matter how small the detail.

Anyone with information about the murder of Jason MacCullough is asked to contact the Integrated Criminal Investigation Division at 902-490-5333. Anonymous tips can be sent to Crime Stoppers by calling toll-free 1-800-222-TIPS(8477), submitting a secure web tip atwww.crimestoppers.ns.ca or via the P3Tips App.