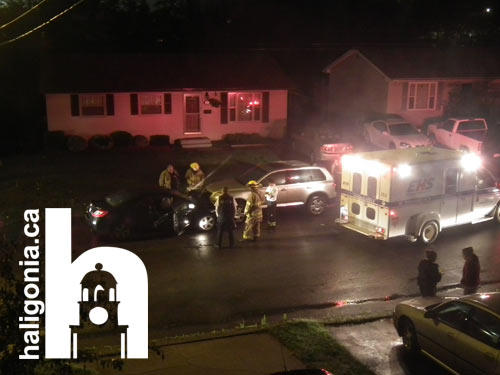 UPDATED 07/28/11 Police are investigating an incident in Cole Harbour early Wednesday morning.
A Haligonia viewer who asked not to be identified submitted photos and explains what they saw:

Around 4am last night on Silistra Drive in Cole Harbour a midsized black car smashed into a parked SUV.  When I went to the window I saw a young man around, 17-22 wearing a dark green hoodie (and I believe light coloured shorts) got out of the passenger side door (his driver side was likely stuck) and ran at full speed up the street.  911 was called and about 5 cop cars showed up and an ambulance and a fire truck. A few of the police cars searched the neighborhood for a bit.  All this time the black car was smoking pretty badly. 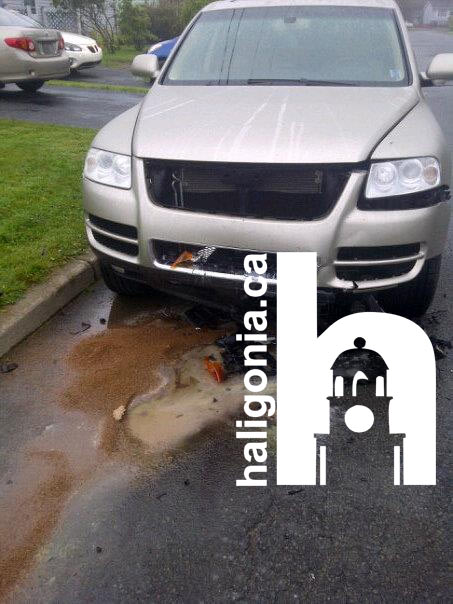 RCMP released the following statement:
July 27, 2011, Halifax Regional Municipality (HRM)… Members of Halifax District RCMP are investigating a two car crash which occurred on Silistra Drive in Cole Harbour early this morning.
Just after 4:00 a.m., police responded to a two-car crash on Silistria Drive in Cole Harbour.  A black Honda Civic had driven into a silver SUV which was parked on Silistria Drive.  Both vehicles received front-end damage.  The black car had been traveling north on Silistria Drive.  A male believed to be in his early 20's was seen exiting the car and running from the scene.  Police are now trying to determine whether the vehicle was stolen.  The suspect is described as a black male, early 20's, wearing a green hoodie and baggy pants. 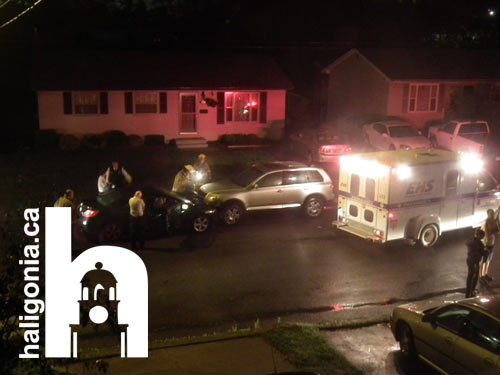 Police are asking anyone with any information about this incident or any other unsolved crime to contact any RCMP office, Halifax Regional Police, or Crime Stoppers anonymously anytime at 1-800-222-TIPS (8477) or by Secure Web Tips at www.crimestoppers.ns.ca.  Calls to Crime Stoppers are not taped or traced and if police make an arrest and lay charges based on a tip, callers qualify for a cash award from $50 – $2000.