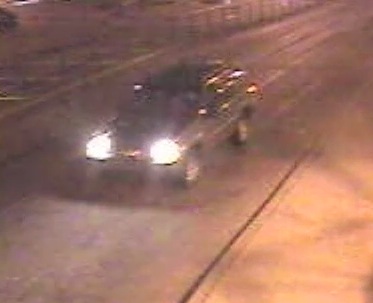 Halifax Regional Police is asking for the public’s assistance in
locating the vehicle (video attached) which was involved in a hit and
run on the MacDonald bridge just after 3 a.m. yesterday that sent two
officers to hospital.

The two officers approached the vehicle to speak with the driver and
its occupants as part of “Operation Christmas.” The vehicle quickly
accelerated dragging one officer a short distance and throwing the other
onto the pavement. The vehicle fled the scene and was last observed in
the Thistle Street area. The officers were taken to hospital where they
were treated and released.

The vehicle is described as a late 1990’s-2000 Grand Jeep Cherokee. It
is a two-toned model with light grey on the top and dark grey on the
bottom. There should also be scratches to the driver’s side of the
vehicle. The driver is described as a white male, approximately 20-25
years old with close cut brown hair and a clean shaven, young looking
face. He is also described as having a medium build and may have blue
eyes. He was wearing a dark coloured t-shirt at the time of the
incident.

Anyone with information about this incident is asked to contact Halifax
Regional Police at 490-5016 or anonymously through Crime Stoppers at
1-800-222-TIPS (8477) or online at www.crimestoppers.ns.ca.