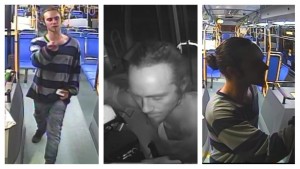 Police are requesting the public’s assistance identifying the suspect in an assault on a bus driver that occurred earlier this week in Halifax.

At 11:55 p.m., officers responded to the 5700 block of South Street following a report that a Halifax Transit bus driver had been assaulted. Officers determined that the bus driver requested a man to leave the bus after the man omitted to pay his fare. The man then assaulted the driver before leaving the bus. The driver was treated by EHS at the scene for non-life threatening injuries.

The suspect is described as a white man in his twenties; 5’5″, 170 lbs, with a slim build, long dirty blond hair and a goatee.

Anyone with information on the identity of the suspect is asked to call police at 902-490-5020. Anonymous tips can be sent to Crime Stoppers by calling toll-free 1-800-222-TIPS (8477), submitting a secure web tip atwww.crimestoppers.ns.ca or by using the P3 Tips app.