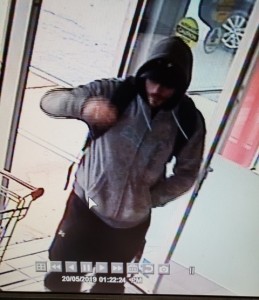 Police are requesting the public’s assistance in identifying a man in relation to a theft of money from a donation box in Halifax. 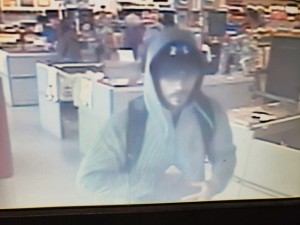 On May 20 at approximately 1:55 p.m., police received a report of a theft-in-progress at the Shoppers Drug Mart on Herring Cove Road. A man broke into a donation box located at the front of the store and stole a quantity of money from the box before fleeing the store. The money was being collected by a local charity.

The suspect is described as a white man in his twenties with a goatee. He was wearing an Under Armour baseball hat and a grey hoodie and was carrying a black backpack. Police are releasing photos of the suspect and are asking for the public’s assistance in identifying him.

Police are asking anyone with information about the identity of the man or the incident to call 902-490-5016.Anonymous tips can be sent to Crime Stoppers by calling toll-free 1-800-222-TIPS (8477), submitting a secure web tip at www.crimestoppers.ns.ca or by using the P3 Tips app.