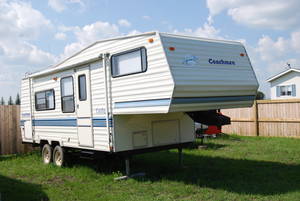 Release:
May 13, 2011, Halifax Regional Municipality (HRM) . . . Royal Canadian Mounted Police are requesting the public's assistance in a recent theft of a motor home from Head of Jeddore, Nova Scotia.


On May 12, 2011, Musquodoboit Harbour RCMP received a complaint of the theft of a 1993 Coachman Catalina Fifth Wheel Travel Trailer  from the front lawn of a residence in Head of Jeddore, Nova Scotia. The trailer had been parked there since August 2009.  Police believe it was taken some time between 6:00 AM and 5:00 PM on May 12, 2011.

The trailer is white and in good condition. Thieves would require a 1/2 or 3/4 ton pickup truck to move it and require a specialized receiver in the bed of the truck.

Police are asking anyone with information about this or any other incident to come forward. People are asked to contact any RCMP office, Halifax Regional Police, or Crime Stoppers anonymously anytime at 1-800-222-TIPS (8477) or by Secure Web Tips at www.crimestoppers.ns.ca. Calls to Crime Stoppers are not taped or traced. If police make an arrest and lay charges based on a tip, callers qualify for a cash award from $50 – $2000.

(note picture attached is of a similar trailer, not exact one stolen)