As of this past February, I joined a running team.  It was a pretty good idea, since I eat out quite regularly – that maaayyy be an understatement!  Anyhow, on this particular running session we had to do hill training!  That’s right – the very words made me quiver with fear.

As it turned out though, it was a cinch.  I ran up and down Citadel Hill 18x, and was barely breathless at the finish.  To celebrate my athletic aptitude…I wanted a drink.  A glass of bubbly was the only thing on my mind, and when Mitch suggested that we go to Saege Bistro for dinner, I happily agreed.

Once inside with my sparkling flute in hand, we made some choices for dinner.  With my metabolism running at a feverish pace (yeah right), I decided to share the Appetizer Tasting Plate ($13) with Mitch and order the uber-delicious sounding scallop entree.

The Appetizer Plate was OK; but I wasn’t thrilled.  The crab cake was very nice; light and with a crisp breading, but it was almost falling apart when the dish arrived at the table.  The shrimp was cooked well and had a great, bright and spicy flavour.  I let M have the spring roll as I was saving room for my main event. 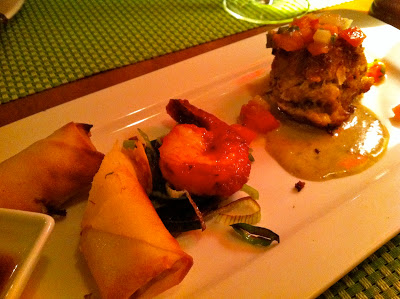 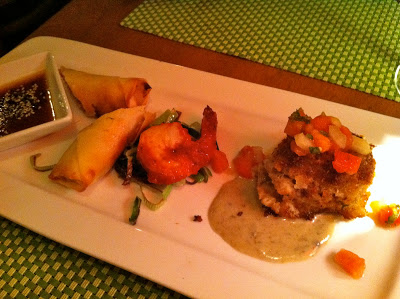 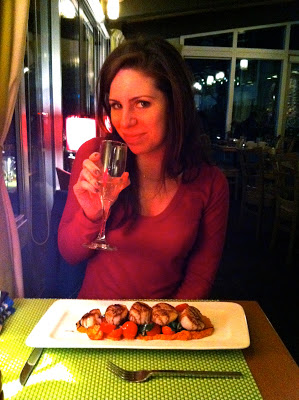 When the entrees arrived, I was ready to dig in.  My scallop dish ($22) was excellent.  The scallops were anchored in a creamy butternut squash & pumpkin puree that had just the right amount of sweetness.  Always one to appreciate some veg, the addition of spinach and tomato was a great choice, with the ripe red fruit bursting in my mouth.  I moved one of the scallops to the side of my plate and made a decadent discovery; hidden seductively between the squash puree and the incredibly supple scallops was a slab of salty, delicious Oulton’s bacon.  I would, 100%, order this dish again. 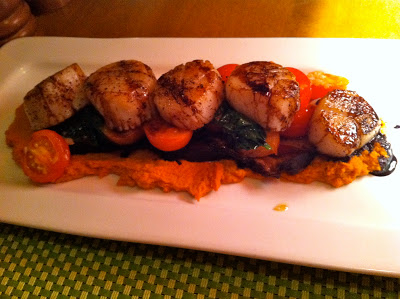 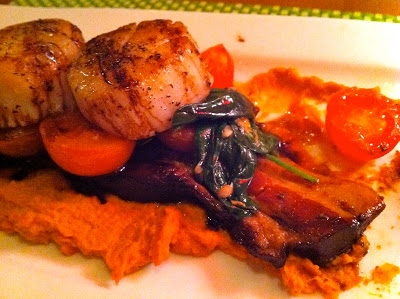 Unfortunately, M wasn’t so lucky the first time around.  I’ve since convinced him to order his steak ‘rare’ instead of his usual (groan) “rare to med-rare”, as he almost always ends up with a medium-well steak.  Minor rant here, as it’s happened at 3 different restos in the last month.  Anyhow, when the second attempt at a rare steak arrived, it was a very nice plate. The meat was super flavourful and tender.  I also put away several forkfuls of the earthy wild mushroom risotto – I could have eaten a whole bowl! 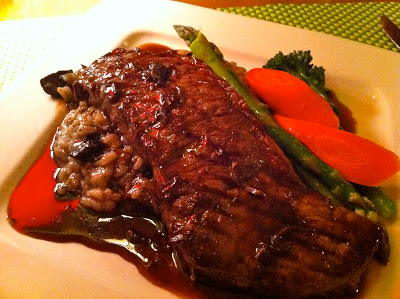 Since I have a salty tooth and M, a sweet, I could do without when the dessert menu appeared.  But I did have a taste of his for good measure. 😉  I had mixed feelings about the Vanilla Bean Cheesecake ($8).  On one hand, the blueberry compote was lovely and the luscious lemon cream ‘to-die-for’, but the cheesecake had a very granular texture that I really didn’t care for.  I’d think twice before ordering this dessert, but some of the other options sounded pretty decadent, and were a nice change from other resto’s old standards. 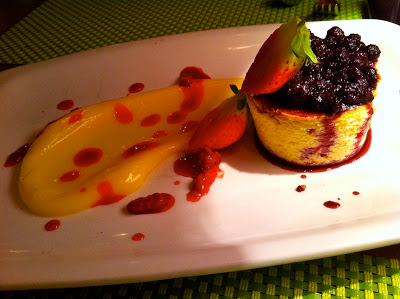 Even with the minor disappointments of this meal; we had an excellent time.  The atmosphere in Saege is comfortable and unpretentious.  It’s one of those casual fine dining spots that allows you to have a great meal at a reasonable price point, but still feel like you indulged. I will go back again, and have a couple times since.  It’s well worth the visit – especially if it’s scallops that you’re craving!