Like many North Americans, I don’t read a lot of poetry, but I do have an appreciation for the form. I also kind of like championing an underdog, so I’m always interested in sharing a good poetry related story when I see one, and the United States Postal Service has just that in their 2012 stamp program. Next year, the USPS will release a series of ten stamps called Twentieth Century Poets. From the USPS website preview: 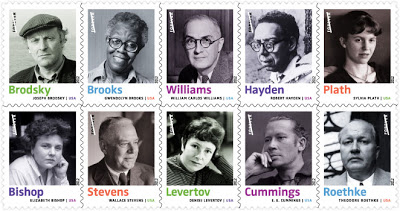 “The number of books published each year in America has been steadily increasing, and poetry is more popular than ever. The ten great writers honored on the Twentieth-Century Poets stamp pane, including several who served as United States Poet Laureate, surely deserve part of the credit.”
The poets included make a wonderful reading list for anyone looking for a good overview of the great names in 20th Century American poetry.

Elizabeth Bishop (M): an American poet with a local connection. This year marked the centenary of her birth and celebrations were held in Nova Scotia and the US. From the Poetry Foundation: “Her verse is marked by precise descriptions of the physical world and an air of poetic serenity, but her underlying themes include the struggle to find a sense of belonging, and the human experiences of grief and longing.”
Joseph Brodsky (M): Russian poet Brodsky was expelled by the Soviet Union in the 1970s and went to the US. Published originally in Russia before his exile, Brodsky studied under Russian great Anna Akhmatova. Brodsky was the first US Poet Laureate and a winner of the Nobel Prize in Literature.

Gwendolyn Brooks (M): A prolific poet of more than 20 books, and the first African American author to be awarded a Pulitzer Prize. According to The Poetry Foundation, “many of Brooks’s works display a political consciousness, especially those from the 1960s and later, with several of her poems reflecting the civil rights activism of that period” and they note that “Brooks once described her style as “folksy narrative,” but she varied her forms, using free verse, sonnets, and other models.”

E. E. Cummings (M): A poet who is largely known for word play and the eschewing of capital letters The Poetry Foundation says “a Cummings poem is spare and precise, employing a few key words eccentrically placed on the page.”

Robert Hayden (M): Born and raised in Detroit, Hayden studied under British poet W.H. Auden at the University of Michigan. Hayden wrote “formal, elegant poems about the black historical experience” that were grounded in extensive study as well as personal experience.
Denise Levertov (M): British born American poet Levertov is the only of these poets I haven’t heard of, and as a result, perhaps the one I’ll explore first. A poet who was both political and religious, she was the poetry editor for the Nation magazine during the 1960s and published over 20 books, and won several major prizes.

Sylvia Plath (M): Among non-poetry readers, Plath is still well known for her novel The Bell Jar, a autobiographical novel that foreshadowed the authors own suicide due to depression. In 1982, her Collected Poems was posthumously awarded the Pulitzer Prize. Plath’s poetry is frequently labeled as “confessional” and The Poetry Archive describes her as a poet of “arresting style and fearless examination of self and society.”
Theodore Roethke (M): During my undergrad, I took a class called 20th Century Poetry and have a distinct memory of studying and loving a poem called The Far Field by Roethke. The Wikipedia entry for Roethke notes that he was a poet known for his “rhythm, rhyming, and natural imagery

Wallace Stevens (M): From The Poetry Foundation: “Wallace Stevens is one of America’s most respected poets. He was a master stylist, employing an extraordinary vocabulary and a rigorous precision in crafting his poems. But he was also a philosopher of aesthetics, vigorously exploring the notion of poetry as the supreme fusion of the creative imagination and objective reality.”
William Carlos Williams (M): A doctor as well as a poet, Williams was considered a modernist who was “known as an experimenter, an innovator, a revolutionary figure in American poetry.” Like Sylvia Plath, he was posthumously awarded the Pulitzer Prize and he continues to be recognized by the Poetry Society through annual award in his name