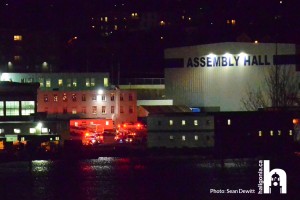 A fire believed to have been started by a power tool battery sent 2 to hospital as a precaution.

After 10pm last night, DND fire with help from several Halifax Fire units were dispatched to the dockyard to deal with a small fire on the HMCS Toronto, in dock for a retrofit.  Fire crews were met with a complicated fire due to the cramped and confined spaces on the ship.

Ventillation of the ship after the fire was beat down took place and the ship was cleared earlier this morning.

There is no information on the extent of the damage.

Irving has assumed lead in relation to this situation.