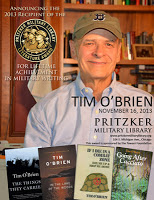 US author Tim O’Brien (M) is the winner of the 2013 Pritzker Military Library Literature Award for Lifetime Achievement in Military Writing.

This is the first time the award has been given to writer of fiction.

“Tim O’Brien’s fiction about Vietnam, which derives from his own experience as a soldier, is haunting, evocative, and wonderfully inventive,” said Rick Atkinson, recipient of the 2011 literature award. “Yet his writing transcends that particular war in that particular era to illuminate our sense of war universally.”

“After being drafted to serve in the Army in Vietnam, Tim O’Brien returned home and shortly thereafter published a candid and powerful memoir of his time in combat. Since then he has published several novels, nearly all of which deal with the Vietnam War. Many critics consider his to be the best writing about Vietnam, and for good reason: National Book Award winner O’Brien writes beautiful, gripping, emotionally intense Literary Fiction. With stunning characters, unforgettable stories, and a blend of fact and fiction, O’Brien raises difficult questions about war, morality, and violence. Start with: The Things They Carried.” – NoveList