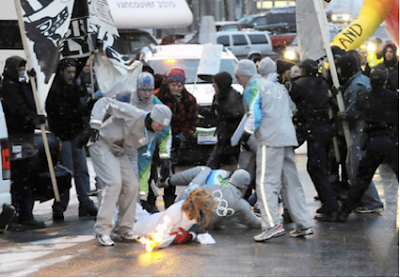 Sorry about the long break here on the blog. It’s been a busy month good and bad.

So a lot has happened since the last post.

First of all the Olympic flame has just crossed the Ontario-Manitoba border. Wait… really? This really is taking forever. One thing I did notice is one of the torch bearers was tackled by a protestor and the newsmedia with Olympic rights (the CTVs and TSNs of the world) kind of pretended it didn’t happen.

There will be no second use for makeitseven.ca any time soon. The Canadian boys failed to win a sixth straight gold, losing in overtime to the Americans.

Should they have even been in overtime? Probably not.

Besides that totally awesome (sense the extreme sarcasm?) goal that Jake Allen let in, in the third period to make it 5-3… the team didn’t really give him much help.

Now I cannot blame one kid. Jordan “the babyfaced assassin” Eberle came out with yet another last minute heroic (he scored with 5.4 seconds left last year in the final). Really the Oilers should just call this kid up now — lord knows they need it.

But in all seriousness, I think the downfall of this team was a mix of format and coaching. Looking at the roster the Canadians are extremely talented. Did they play like a TEAM in the final? Sure… for about 4 minutes at the end of the game. How many times did the Canadians try to break into the US zone by skating it in, only to be foiled. More times than I care to count. In fact it’s probably around the same number as the number of odd-man rushes the US players ended up with.

The Canadians never really had to play as a team to win. Their first three games were a dance, and sure they looked good. But who doesn’t look good against Latvia.

Lets throw one more problem into the mix. This is the superstitious side coming out.

Quinn you threw off the time-space continuum of coaching. Clearly you are being of no help to the Edmonton Oilers. Perhaps coming back for your required second gold would’ve been the proper thing to do. 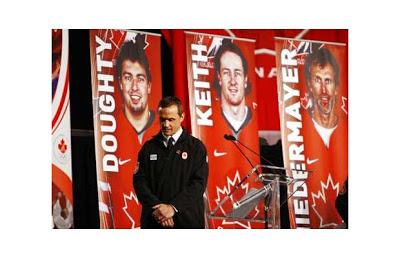 I was at work when the team was announced. There were some surprises and my colleagues balked at the idea that Patrice Bergeron was named to the team.

But in my mind you can’t just take the top 12 scoring forwards, because that will get you nowhere when the other team is killing you in faceoffs and winning the battles.

Bergeron is a faceoff man, he’s used in every situation in Boston, and he’s not afraid to get into the corners. I can see him doing anything that the coaches ask. And I think he would work out well on a line with someone like Mike Richards.

Anyways, I like the balance of old and young. And the choice of Scott Niedermayer as captain is appropriate.

I like Canada’s chances with these guys on the ice.