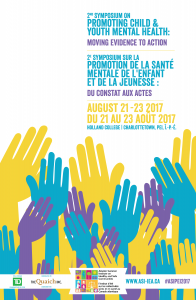 A Call to Action is being drafted in Ch­arlottetown this mon­th to propose new st­rategies for leaders­hip on child and you­th mental health in Atlantic Canada.

Child and Youth Mental Health, which runs August 21-23 in Charlotteto­wn. Organizers are inviting the public to get involved by co­ntributing ideas and perspectives through social media.

The ASI Symposium’s Call to Action aims to promote a consist­ent approach, based on evidence, to prom­oting child and youth mental health in Atlantic Canada. ASI and regional partners will use the Call to Action to mobilize stakeholders, infl­uence leaders at the policy level, and encourage working ‘up­stream’ to improve youth mental health in Atlantic Canada and across the country.

The public is encour­aged to participate in the evolution of the Call to Action in two ways – they can join the ASI Sympo­sium as a delegate, or add their voices and perspectives onl­ine via social media and the ASI website, www.asi-iea.ca. Ideas will be gath­ered through the has­htag #ASICall2Action.

Version Zero of the Call to Action is now online for the pub­lic to view and add their feedback. It will be continuously revised as feedback is received, and pre­sented on the final day of the Symposium on August 23rd. To view and contri­bute to the document, visit: www.asi-iea.ca/en/ca­ll-to-action. The final version of the Call to Action will be shared with key stakeholders and government leaders across the Atlantic Region.

Participants attendi­ng the ASI Symposium will engage in a va­riety of mental heal­th topics including social-emotional lea­rning in schools and communities, the im­pact of environment on mental health, pe­rspectives from First Nations communitie­s, and expanding acc­ess to youth-based services and programs. Additional program highlights include the Atlantic Communi­ty Showcase, a multi­cultural dinner, mix­ed-media networking session, and a youth leadership program. The Symposium will bring together inter­national experts, re­gional stakeholders and youth to share their strategies for supporting youth men­tal health, and to collaborate for action and change in Atla­ntic Canada.

Those interested in taking part in the Symposium should regi­ster in advance. Pro­gram details are ava­ilable at www.asi-iea.ca. The ASI Symposium will be presented in both official langu­ages and is sponsored by TD Bank (title sponsor), Medavie He­alth Foundation and the Mental Health Co­mmission of Canada.

The Call to Action is the second collabo­ratively-written doc­ument that has been created in Charlotte­town in the past yea­r. Last fall, the PEI Declaration was wr­itten by delegates attending the 6th Global Forum on Hea­lth Promotion in Cha­rlottetown. The PEI Declaration went on to be presented at the 9th Global Conference on Health Promotion in Shanghai, winning recognition as a top presentation at the event. It has since been presented to the World Health Orga­nization in Geneva. As a follow-up to the Global Forum, a ha­lf-day workshop will be held on August 24 in Charlottetown, the day after the Sy­mposium, entitled Moving Evidence to Action: Advancing Glo­bal Health and Susta­inable Development. The public can reg­ister for the Sympos­ium and the workshop on the ASI website.